Emmanuel Kelly is know as the first pop star who is differently abled and has performed duets with David Foster and Coldplay, opened for Snoop Dogg in front of a sold-out audience, performed a set of concerts in Juarez Mexico to sold out audiences, becoming the 1st non latino pop artist to do so. Kelly was found half dead in Iraq, but lived to find his brother and spend the next 8 years in an orphanage when the two were finally adopted. Today, Emmanuel Kelly is a media sensation after his Australian “X-Factor” audition went viral, and is a big advocate for diversity.

Succeeding in Life and Your Career

Equality as a Game Changer

From Learning Self-acceptance to Inspiring Others

Emmanuel Kelly is breaking into and disrupting the norms of the music industry unlike any other artist. In the last 2 years alone, Emmanuel has performed duets with David Foster and Coldplay, opened for Snoop Dogg in front of a sold-out audience, performed a set of concerts in Juarez Mexico to sold out audiences, becoming the 1st non latino pop artist to do so. Additionally, performing at the United Nations as a celebrity youth ambassador for world leaders and royal families, and headlining a performance at the Forbes Impact Summit, receiving 3 standing ovations. Soon thereafter, lead singer Chris Martin began mentoring and producing Emmanuel’s music field in the midst of making his first album. But things weren’t always looking up for this bright young star.

Emmanuel was found half dead as a baby in a box by two soldiers in a park in Iraq, with no birth certificate, passport, and no Identity. Realistically, Emmanuel Kelly shouldn’t be ALIVE, but fate had a different plan. He was taken to Mother Theresa orphanage in Baghdad where he met his now brother, Ahmed. Emmanuel and Ahmed spent the next 7 and a half years as children of war, living a nightmare, experiencing and seeing some of the worst of mankind, wondering everyday if death would claim them. When Emmanuel was 5, humanitarian Moira Kelly heard about the brothers while working in Albania. Months later, Moira flew to meet the brothers, immediately fell in love with their energy, will to survive and desire to create a world filled with love. Two and a half years later, after many complications, Moira brought the brothers to Australia for life changing surgeries. Over the next 14 years Emmanuel had 6 surgeries, stepping over huge obstacles such as learning how to walk and feed himself using a knife & fork. Emmanuel’s biggest obstacle was learning how to embrace and love himself on the inside and out, while overcoming his insecurities.

Today, Emmanuel Kelly is a media sensation after his Australian “X-Factor” audition where his rendition of “Imagine” went viral. Emmanuel has captured, inspired, and entertained close to 1 billion people worldwide with his performances. In April 2018, Emmanuel’s career sky rocketed when Chris Martin joined him on stage for a debut duet of Emmanuel’s new single “EDIS – Never Alone” during a televised broadcast to over 100 million homes. Days following, Emmanuel was featured on “Billboard” Magazine.

Once his song was officially live, it went viral with over 500K views in just 4 days. On the 5th day, Coldplay posted Emmanuel’s “EDIS – Never Alone” video on their social media in support of his amazing song. To date, it has over 1 million views since its official release, with thousands of streams and downloads organically grown by fans.

Emmanuel Kelly is the freshest face of diversity, becoming the first pop star who is differently abled. 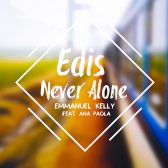