Comedian, TV Host, Co-Author, He’s Just Not That Into You and Writer, Sex and the City

So You Think You Want To Be In Love

Greg Behrendt, the co-author of The New York Times best selling book, He’s Just Not That into You, partners with his wife, Amiira Ruotola-Behrendt, who co-authored with Greg the follow up book, It’s Called a Break-Up Because It’s ...

Greg Behrendt, the co-author of The New York Times best selling book, He’s Just Not That into You, partners with his wife, Amiira Ruotola-Behrendt, who co-authored with Greg the follow up book, It’s Called a Break-Up Because It’s Broken. In their presentation, the Behrendts discuss the confusion of trying to find love in the new Millennium and how technology has changed the romantic playing field. They offer the audience unique insights into modern relationships based on the winning principals that have been embraced by women worldwide. More than just a keynote, the Behrendts also weave their uplifting advice with Greg’s stand up comedy and finish each lecture with a rousing Q&A session.

Greg Behrendt’s Key Accomplishments Include . . .
A well known stand-up comedian, Greg Behrendt quickly turned his keen eye on relationships and the mysteries of manhood into a gig as writer and consultant for Sex in the City. Greg Behrendt helped coin the phrase, “He’s just not that into you,” and turned that into a bestseller, titled, appropriately, He’s Just Not That Into You, co-authored with Liz Tuccillo. Behrendt followed that up with It’s Called a Break-Up Because It’s Broken, co-authored with his wife, Amiira Ruotula-Behrendt.

He’s Just Not That Into You established Greg Behrendt as a voice of reason and inspiration for all of us negotiating – and sometimes drowning in – the treacherous waters of romantic relationships. The book became the publishing phenomenon of the year after its release and shot to the #1 slot on the bestseller lists worldwide, including The New York Times, Wall Street Journal and USA Today. Oprah Winfrey devoted two shows to Greg Behrendt and the book’s simple, but powerful message. Greg Behrendt also made numerous television appearances including NBC’s Today Show, 20/20 and Larry King Live. The book soon became a top grossing film and featured a stellar cast including Jennifer Aniston, Drew Barrymore, Scarlett Johansson and Ben Affleck.

Greg Behrendt is a standup comic first and foremost. His comedy resume features HBO’s Mantastic, Comedy Central Presents and Uncool, seen exclusively on Comedy Central, as well as many appearances on late night shows like The Tonight Show with Jay Leno, The Late Show with David Letterman and Late Night with Conan O’Brien. He was also named by Variety as one of the “10 Comics to Watch.”

Greg Behrendt’s comedy DVD’s include That Guy from That Thing and Greg Behrendt Is Uncool,which bring his deepest, darkest fears of becoming a no-longer-relevant Gen-Xer to the surface, deconstruct the notion of “cool” and offer in its place a new definition for adulthood. Alternating between befuddlement and anger, Greg Behrendt brings his everyman point of view to the ridiculousness of life and his takes on love, sex, relationships, snack crackers and elephants.

More About Greg Behrendt . . .
Greg Behrendt hosted the self-titled The Greg Behrendt Show for Sony Pictures Television which premiered in September 2006. The show featured Behrendt’s signature humor and advice when it comes to all kinds of relationships – including those with family, friends, romantic partners and relationships in the workplace.

Greg Behrendt, with his wife and co-author Amiira Ruotola-Behrendt, released a follow-up relationship book. Offering straight talk, tough love, and hilarious (yet useful) tips on how to survive and get over break-ups. The book, titled It’s Called a Break-Up Because It’s Broken, immediately jumped to the top of the book charts including the Wall Street Journal, Amazon.com, Barnes & Noble.com, and The New York Times. The couple also has a third book titled, It’s Just a Date!

Greg Behrendt also performs and records with his band, The Reigning Monarchs.

Greg Behrendt currently lives in CA with his wife/writing and producing partner, Amiira and their daughters. 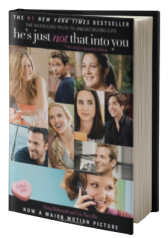 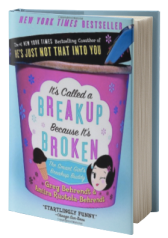