The Next Great Bubble Boom

The Great Boom Ahead

Growth Markets of the 21st Century

Business Strategies for the 2000's

The Work Revolution Ahead

Harry Dent’s Key Accomplishments Include . . . Financial expert Harry S. Dent, Jr. brings a very lively and common sense approach to helping financial advisors and everyday investors understand fundamental trends driving the economy. He ties the baby boom generation’s massive spending, saving and debt trends along with the fast-paced information revolution, the pervasive workplace changes, and the coming population shift outside of suburbs into one simple, cohesive picture. Using research developed from years of hands-on business experience, Harry S. Dent, Jr. offers a refreshingly positive and understandable view of the economic future. As a best selling author on economics, Harry Dent is the developer of The Dent Method – an economic forecasting approach based on changes in demographic trends.

In his book The Great Boom Ahead, published in 1992, Harry Dent stood virtually alone in accurately forecasting the unanticipated “Boom” of the 1990s. Today he continues to educate audiences about his predictions for the next and possibly last great bull market, from late 2005 into early to mid 2010. Since 1992 Harry Dent has authored two consecutive best sellers The Roaring 2000s and The Roaring 2000s Investor. In his book, The Next Great Bubble Boom, Harry S.Dent Jr. offers a comprehensive forecast for the next two decades and explains how fundamental trends suggest strong growth ahead, followed by a longer-term economic contraction.

More About Harry S. Dent . . .
Harry Dent received his MBA from Harvard Business School, where he was a Baker Scholar and was elected to the Century Club for leadership excellence. Since 1988 he has been speaking to executives, financial advisors and investors around the world. Harry S. Dent has appeared on Good Morning America, PBS, CNBC, CNN/FN, and has been featured in Barron’s, Investor’s Business Daily, Entrepreneur, Fortune, Success, US News and World Report, Business Week, The Wall Street Journal, American Demographics and Omni.

While at Bain & Company Harry Dent worked as a consultant with several Fortune 100 companies. He has also been CEO of several entrepreneurial growth companies and an investor in new ventures. A frequent speaker on economic trends, Harry S. Dent educates clients and partners on The Dent Method and provides strategic vision for asset allocation and investment selection.

“Harry Dent is the reigning expert in applying sophisticated demographic analysis to economic forecasting. His past record of getting it right speaks for itself…given his track record, I won’t be betting against him.”

“Harry Dent has been among our most popular, stimulating and controversial keynote speakers. Dent began predicting the huge tech stock-led run up at the largest-of-all investor conventions in 1993. Dent’s fresh perspective is the clearest and most actionable application of one of the most certain factors in our economic world: demographics. Because Dent’s conclusions are so refreshingly specific and stimulate long term strategic business and investment planning, I never miss his talks and predictions.” 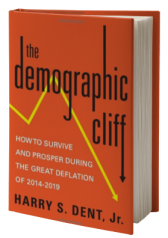