Ice-T is a top entertainment keynote speaker, rapper, and actor. As an artist, Ice’s reach has crossed from music into film and television, and interactive media. His syndicated TV show The Mediator debuted in March of 2021 to rave reviews, along with the the 4th season of his crime show In Ice Cold Blood (Oxygen). Ice also won a Grammy award in 2021, this is his 2nd Grammy and his 4th nomination. Keep an eye out for his 22nd season of Law & Order: SVU – This means Ice has been on TV longer than any other male actor on TV EVER!

Ice-T’s life has often been defined by overcoming adversity. As a child he lost both of his parents by the time he was 11. He was then shipped from New Jersey to Los Angeles to live with an alcoholic aunt who treated him horribly. At 17 he moved out and started living on his...

Ice-T’s life has often been defined by overcoming adversity. As a child he lost both of his parents by the time he was 11. He was then shipped from New Jersey to Los Angeles to live with an alcoholic aunt who treated him horribly. At 17 he moved out and started living on his own in south-central while the violent and infamous gang culture exploded. To add to this, he got his girlfriend pregnant. Faced with that responsibility, he decided to join the army. While in the army, he learned the power of discipline. He also got tremendous inspiration from a drill sergeant who told him, “You’re in here because you can’t make it in civilian life!”  After his stint as a Ranger, he settled into civilian life by becoming a master criminal. It was during this time period that Ice got into a horrific car accident and was in a coma for three days. At this point in his life, the new musical form of Rap debuted and quickly caught on. Ice had always made gang rhymes (“Crips don’t die, they multiply”) and realized that he had a talent for writing street poetry. Rather than mimicking the braggadocious party raps that everyone else was doing, he created the genre of gangster rap. When he approached record labels about his music he was always told three things: only East Coast rappers sell, rap music is a fad, and you’re not talented. Time and time again, Ice was thrown into adversity. The tune of his life was the repetitive ‘obstacle, opportunity, obstacle, opportunity’. His mindset at every juncture brought him success. In his lecture Overcoming Adversity he talks about the lessons he learned and what he did to not just survive, but to THRIVE. In the current climate that we’re in, these inspiring lessons are even more relevant and profound.

Race in America: Two Sides of a Coin

The Cultural Relevance of Rap Music & How It Shaped My Life

Ice-T not only invented gangster rap, he has lived it. He is the original embodiment of LA hip-hop. Through his music, his book, The Ice Opinion, and his lecture tours of America’s prisons, high schools, and colleges (including Harvard, Berkeley, and Stanford), Ice-T has become an influential spokesman for America’s youth, regardless of color. He has been the keynote speaker at a number of Internet conventions including the 1999 College Music Journal Conference in New York, Rotterdam Film Festival in 2000, New York Music & Internet Expo in 2000, and Canadian Music Week in 2000. He is nominated for a Grammy Award in 2021 and acts in three running TV shows. Always staying culturally relevant, his Ice Cold Facts and Daily Game on Twitter routinely receive 10,000 interactions.

As he was born in New Jersey, Ice-T learned the art of survival quickly. An only child whose parents passed away when he was very young, he became involved in Los Angeles gangs before spending four years in the army. His first break came when the producers of the film Breakin’ asked him to rap in the movie. He went on to become rap music’s original gangster, writing songs “Six in the Mornin” and “New Jack Hustler.”

As his politics were grabbing headlines, Ice-T’s film and television career was taking off. The controversial personality secured roles in Trespass, New Jack City, Ricochet and Johnny Mnemonic, all while building a flourishing television career. He has various independent and documentary film roles to his credit as well.

As an artist, his reach has crossed from music into film and television, and interactive media. He is the voice of “Madd Dogg” on one of the hottest selling games, Grand Theft Auto: San Andreas. He also plays a character in the new video game Scarface which came out the fall of 2006. His book, The Ice Opinion, was published in 1994 and has been translated into French, Japanese, German and Italian.

Ice was genuine and gracious and I could have packed a hall with hundreds of people to see him. He spoke so highly of the military that we were ecstatic – I would STRONGLY encourage him to do more of this. There are soldiers all around the Army who need to hear one of their own – unlike so many other celebrities of his stature, he has walked the walk, talked the talk, and remembers how it feels to be a soldier…  Please convey my thanks to Ice for being so cool and good to our soldiers. He does not know just how much his visit, openness, and dignity meant. 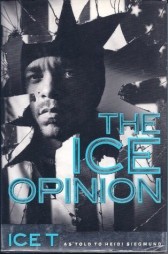