Co-founder of the Human Performance Institute, Author, and Vice President of Applied Science and Performance Training at Wellness & Prevention, Inc.

Human energy is the most critical resource businesses have. But in today’s 24/7 environment, the constant pressure to perform means organizations are asking more of their employees than ever before. The problem is that without the right ...

Human energy is the most critical resource businesses have. But in today’s 24/7 environment, the constant pressure to perform means organizations are asking more of their employees than ever before. The problem is that without the right training, the demands on employees’ energy inevitably exceed capacity, resulting in sub-optimal performance, disengagement, health issues, and poor work-life balance.

The Corporate Athlete Course helps empower individuals to manage and expand their most critical resource for high performance, their energy capacity, to meet the ever-increasing demands and become more productive and effective under pressure without sacrificing their health and happiness.

The Corporate Athlete® Course is based on the sciences of performance psychology, exercise physiology and nutrition.  This Keynote includes an overview of this multi-disciplinary Energy Management Technology.

Dr. Jack Groppel, sport scientist, educator, author, entrepreneur, consultant, and coach, is a Professor at Judson University, with a joint appointment in both Exercise &amp; Sport Science, and in Business. He most recently served as the CoFounder of the Johnson &amp; Johnson HumanPerformance Institute. As an internationally recognized authority and pioneer in the science of human performance, Dr Groppel also served as an Adjunct Professor of Management at the J.L. Kellogg School of Management at Northwestern University for several years.

Dr. Groppel’s has:
Addressed the issue of worksite wellness and performance at such policy events as the United
Nations Side Event for Physical Activity and Non-Communicable Disease, and delivered 3 U.S.
Congressional Briefings on Worksite Health Promotion
Represented the worksite wellness industry at the historic Surgeon General’s Call to Action on
Walking and Walkable Communities.
Authored The Corporate Athlete book on achieving the pinnacle of corporate performance and co-
authored The Corporate Athlete Advantage. Summited Mt. Kilimanjaro in 2017 (after bilateral
knee replacements) with his then 12-year-old son. He has also been featured in the New York
Times, Fortune, Forbes, Shape, Fast Company and Huffington Post, among others.

Dr. Groppel dedicated 16 years of service to the United States Tennis Association (USTA) as Chairman of the National Sport Science Committee. He served on the National Board of Directors of the United States Professional Tennis Association (USPTA), and had a column entitled, ‘Ask the Professor’ in USPTA’s Addvantage magazine that ran for 25 years.

Dr. Groppel is a recognized authority in sport research. His research has included performance analyses of over 25 sports, having successfully worked with numerous world-class athletes such as the Chicago White Sox, the New Jersey Devils, Olympic gymnast and bronze medalist Wendy Bruce, NFL Pro Bowler Wes Welker, and scores of world-ranked tennis professionals, including Stan Smith and Michael Chang. He gave the keynote address at the 1984 Olympic Scientific
Congress. His scientific findings have appeared in numerous peer-reviewed journals and he also served as an instruction editor to Tennis Magazine.

Affiliations:
Fellow in the American College of Sports Medicine

JLG Sport Bio 110602
Fellow in the American College of Nutrition, a Board certified nutritionist, &amp; a former Research
Associate to the U.S. Olympic Training Center
Currently serves on the Board of Directors of the Health Enhancement Research Organization
(HERO)
Health &amp; Wellness Advisor to the Tennis Industry Association
Presentations / Public Speaking:

“If high performance, quality of life, and long-term physical and emotional health are important to you, Jack Groppel’s program is a wise investment.”

“One of the most common and costly problems in our industry is burn-out. Jack Groppel delivers practical solutions to help prevent this, and equips our managers with the tools to grow professionally and personally within our organization. Incorporating his program into our culture demonstrates our company’s commitment to our crew members, and builds loyalty.” 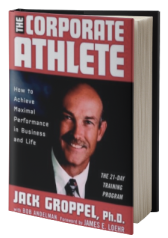