Former Fortune 500 CEO, Leadership and Management Consultant and Author of The Servant Leader

James Autry is a top keynote speaker, author, consultant, and workshop leader, specializing in leadership and management, particularly in creating a workplace in which people can do good work, can find meaning in their careers, and can share in the rewards. During his 30 years at Meredith Corporation, Autry was known as one of the most respected magazine executives in America after working his way up from a copy editor to senior vice president and president of its magazine group.

Love and Profit: Finding the Balance in Life and Work

Putting the Spirit of Work to Work

James Autry is now a poet, consultant and an award-winning business author of such books as The Servant Leader, Looking Around for God, The Spirit of Retirement, Confessions of An Accidental Businessman, which was a finalist in the 1996 Global Business Book Awards, and Love and Profit: The Art of Caring Leadership which won the prestigious Johnson, Smith & Knisely Award as having had the highest impact on executive thinking in 1992. Love and Profit also has been published in Japanese, Swedish, Chinese, Spanish and Russian.

The works of James Autry have appeared in many anthologies and magazines. In 1991, theKentucky Poetry Review published a special James A. Autry issue. Mr. Autry also received considerable national attention when he was one of the poets featured on Bill Moyers’ special series,The Power of the Word, on PBS. He is also featured in two videos, Love and Profit and Life and Work, both produced by The Excellence in Training Corporation.

Considered one of the most popular and influential consultants in the business community, James Autry has spoken to organizations such as AT&T, IBM, MTV, Hallmark, Xerox and Maytag. He has appeared on the Today Show and PBS and has been featured in USA Today, Time, Newsweek, Fortune and Working Woman.

James Autry is a popular speaker and workshop leader, specializing in leadership and management, particularly in creating a workplace in which people can do good work, can find meaning in their careers, and can share in the rewards–not just the professional and financial rewards, but the psychological, emotional, and spiritual rewards of a job well done. He specializes in creating workplaces of honesty, openness, and trust.

More About James A. Autry. . .
James Autry has also been active in many civic and charitable organizations and most notably has worked with disability rights groups for over 25 years. Mr. Autry is a founder and chairman of People for the American Way, a national constitutional rights group.

James A. Autry, who in 1996-97, held the Dean Helen LeBaron Hilton Chair in Leadership at Iowa State University, has been instrumental in shaping the field of service journalism and has worked to establish service journalism chairs at the University of Missouri and the University of Mississippi, where he was named a Distinguished Alumnus and was elected to the Alumni Hall of Fame. He fulfilled his military service as a jet fighter pilot in Europe during the cold war.

James Autry also served on President Jimmy Carter’s national advisory committee for the White House Conference on Families and was president of the Institute for the Advancement of Health. Other involvement has included his work with Epilepsy Foundation of America and the Des Moines Symphony. Mr. Autry is also founder of the Des Moines National Poetry Festival.

James Autry holds three honorary degrees and in 1991, the University of Missouri-Columbia awarded him the Missouri Medal of Honor for Distinguished Service in Journalism, an award given for a long track record of excellence.

“Jim Autry’s clear insights, told with wit and poetry, show how we may see traces of the divine shining through our everyday world.”

“The Servant Leader is a bold step toward a necessary redefinition of business as an arena of caring and not a mere instrument for producing profit.” 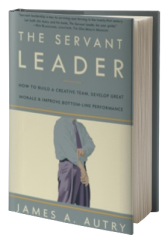