Over his career, Goldberg made history in gripping, infamous court cases as one of the most influential legal minds in the country. As a lauded scholar of criminal and constitutional law, Goldberg taught at his Alma Mater, Harvard Law School.

Goldberg is a no-holds-bar, straight shooter who defined monumental legal precedents, such as the government’s use of the RICO statutes against organized crime. Appointed as the federal prosecutor by then attorney general RFK, he rooted out the rampant corruption in what JFK called “the most corrupt county in the country.” Goldberg has been featured as a primary figure in five books on the JFK/RFK administration.

Play Trump Attorney, The Courtroom is My Theater - Jay Goldberg

“Goldberg is one of the foremost litigators of this or any generation.”

“I consider [Jay] to have the best killer trial skills I have ever seen in my 47 years of practice, and I have worked with the best, courtroom presence, capturing the jury’s attention through devastating cross and summations that have jurors on the edge of their seats.”

Former Chief of the Criminal Division of the United States Attorney's Office S.D.N.Y 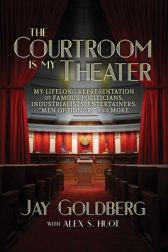