Comedian and Former Host of The Tonight Show

His “everyman”-style and personality have helped him earn millions of fans worldwide, especially in the regions where people relate to his personable style and work ethic. In addition to traversing the U.S., he has entertained in various countries, including Bosnia, where he performed for military troops associated with the war in Afghanistan, and Aviano, Italy, where he performed for troops associated with the peacekeeping efforts in Bosnia. He remains passionate about performing in front of live audiences, including the military, and appears regularly in Las Vegas, on college campuses around the United States and in other venues.

A Night with Jay Leno

Jay Leno’s late-night television ratings domination included more than two decades of “The Tonight Show with Jay Leno,” winning every consecutive quarter of his hosting over the past 19 years. After resuming hosting the 11:35 PM program following a one-time brief interruption of these duties, Jay once again took the show to the top, leading all of the ensuing quarters handily for another three years. Under his helm, the show was honored by the Television Academy with an Emmy for “Outstanding Comedy, Variety or Music Series.” “The Tonight Show” has also taken home the trophy for “Favorite Late Night Show” in the annual TV Guide Awards determined by voting viewers, and Jay was recently installed in the Television Academy’s Broadcast Hall of Fame.

Leno, himself, is the recipient of the People’s Choice Award and other honors, including the Harris Poll selection as most popular star on television. Other personal highlights include the Hasty Pudding Award at Harvard University, an honor whose sole prior comedy/talk host recipient was Johnny Carson; receiving a star on Hollywood’s Walk of Fame, and being the first person to drive the pace car of all major NASCAR events.

It was in May of 1992 when Jay followed in the footsteps of legendary NBC late-night hosts Steve Allen, Jack Paar and Johnny Carson as “Tonight Show” host. Pitted against another television superstar David Letterman in the ll:35 PM hour, Jay became the ratings leader of late night within two years and never looked back, establishing firm leadership in all demographic categories, a winning streak exceeding 50 consecutive quarters.

An indefatigable performer, Leno loves to test his humor live on audiences across the nation, performing over 100 live appearances in nightclubs, theaters and stadiums each year. He has been touted as one of the nicest people in show business and the hardest-working — a winning tandem for the man who says “Anyone can have a life – careers are hard to come by!”

Moreover, he is committed to using his amalgam of talents to help those less fortunate. Each year, he serves as Master of Ceremonies and does numerous benefit performances, including shows for those whose lives were devastated by the 9/11 tragedy, the tsunami in Thailand, hurricanes in the gulf, and the severe economic downturn in Detroit. He leads the annual Love Ride in California to benefit numerous humanitarian organizations serving people with autism, muscular dystrophy, and Special Olympics, among many others.

He has also served as honorary campaign chairman for several years for the Entertainment Industry Foundation, Hollywood’s charitable arm, and he has assisted the Gender Apartheid campaign led by wife Mavis together with the Feminist Majority, to free Afghan women of Taliban tyranny, an effort for which Mavis and The Feminist Majority were nominated for the Nobel Peace Prize.

When he is not performing, writing, doing charitable work, Jay keeps busy doing voice-over work in such movies as “Cars” and “Igor” and the hit-TV show “The Fairly Oddparents” (Nickelodeon), where the character “The Crimson Chin” – a superhero with a chin with superpowers – was inspired by Leno’s own noted jawline. He also is a much-in-demand corporate speaker for companies including General Motors, and he is a monthly columnist in “Popular Mechanics.” And in his “spare” time (as if he has any), he enjoys working on his collection of classic cars and motorcycles. In fact, he has built a number of cars, including an acclaimed eco-car in his eco-friendly green garage. 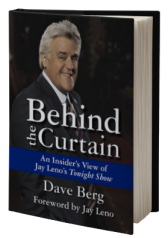