Jim Kelly is a top motivational keynote speaker and former NFL Quarterback. He is a polished keynote speaker and has spoken to a wide variety of organizations including Fortune 500 companies, universities, healthcare systems, and many others. In his presentations, he shares his life story of overcoming obstacles in addition to his insights on leadership, teamwork, and raising a special needs child. Jim Kelly’s story is one of “Perseverance.”

Jim Kelly is considered one of the elite quarterbacks in the history of the National Football League. He led the Buffalo Bills to four consecutive Super Bowls in 1991 ‘92, ‘93 and 1994. In 2002, Jim Kelly was inducted into the Pro Football Hall of Fame.

Nicknamed “Machine-Gun Kelly”, Jim Kelly was perhaps best known for running the Bills’ “No-Huddle Offense”, which was fast-paced and denied opposing defenses the opportunity to make timely substitutions, establishing the Buffalo Bills as one of the NFL’s most successful and dangerous offenses.

The Buffalo Bills selected quarterback Jim Kelly in the first round of the 1983 NFL Draft. However, the Miami Hurricane star opted to sign with the Houston Gamblers of the United States Football League. In two seasons with the Gamblers, Jim Kelly threw for 9,842 yards and 83 touchdowns.

The USFL folded following the 1985 season, and Jim Kelly, just prior to the start of the 1986 NFL season, signed with the Bills.

A strong-armed passer with a “linebacker’s mentality,” Jim Kelly lived up to his advance billing, as he virtually rewrote the Buffalo Bills’ record book for quarterbacks. Only three players in NFL history had reached the 30,000-yard career passing mark faster. Eight times during his NFL career, Jim Kelly passed for more than 3,000 yards in a season, and twenty-six times he passed for more than 300 yards in a game. On September 13, 1992, in a 34-31 shootout victory over the Steve Young-led San Francisco 49ers, Jim Kelly passed for a career-high 403 yards.

In 11 seasons, Jim Kelly led the Buffalo Bills to the playoffs eight times. In 17 playoff game appearances, including four consecutive Super Bowls, he passed for 3,863 yards and 21 touchdowns. At the time of his retirement, his 84.4 passer rating ranked sixth all-time and was second when compared to Hall of Fame quarterbacks. Jim Kelly’s 35,467 career passing yards ranked tenth in NFL history; his 2,874 completions ranked eighth; and his 237 touchdowns ranked thirteenth.

In 1997, Jim Kelly announced his decision to retire from the only team he played for. In 2001, he became the first and only Buffalo Bills player to have his number (12) officially retired and added to the Buffalo Bills “Wall of Fame.” Jim Kelly was inducted into the Pro Football Hall of Fame in Canton, Ohio in 2002.

Jim Kelly is a polished keynote speaker and has spoken to a wide variety of organizations includingFortune 500 companies, universities, healthcare systems and many others. In his presentations, he shares his life story of overcoming obstacles in addition to his insights on leadership, teamwork and raising a special needs child. Jim Kelly’s story is one of “Perseverance.”

More About Jim Kelly . . .
Although Jim Kelly led the Buffalo Bills, to a record-setting four consecutive Super Bowls, he never won the NFL’s championship game. Kelly’s standing in the eyes of his colleagues and fans, however, was never affected by his failure to win the big game. His record both on the field and off, is universally respected.

Jim Kelly has devoted much of his post-football life to his son, Hunter, who was diagnosed with Krabbe disease (Globoid-cell Leukodystrophy) and passed away on August 5, 2005 at the age of eight. Jim Kelly established an organization called Hunter’s Hope, to raise funds to fight the disease. His advocacy on behalf on Krabbe patients has vastly increased national awareness of the disease. Jim Kelly and his wife, Jill, founded the annual “Hunter’s Day of Hope”, which is held every year on February 14, the birthday of both Jim and Hunter Kelly.

Jim Kelly continues to reside in upstate New York, with his wife and children.

“You can do no better than Jim Kelly. I am so grateful to have worked with this outstanding man… I simply cannot say enough about the whole experience.” 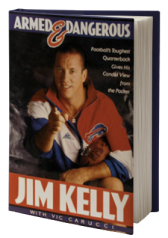