O’Neill worked for Goldman Sachs from 1995-2013, spending the majority of his time there as Chief Economist before being named Chairman of their Asset Management Division in 2010.  His role was a newly created position in which O’Neill managed over US$800 billion in assets.

O’Neill is the creator of the acronym “BRIC” to group Brazil, Russia, India, and China in terms of their similar stages of economic development. He has conducted much research about these and other emerging economies.  He has published various books on the topic, and in 2014 made a documentary series for the BBC entitled MINT: The Next Economic Giants.  He writes frequently on these and many other international economic and financial topics for leading international media.

From 2014, O’Neill chaired a formal review into AMR (antimicrobial resistance) reporting its final recommendations in 2016, as well as contributing to high level agreement at the UN that year.  He also chaired the Cities Growth Commission in the UK, when it provided its final recommendations, which formed the impetus for the government’s policy on devolution as well as the concept of the Northern Powerhouse.  He is one of the founding trustees of the UK educational charity, SHINE, and following his move into government, became their lifetime President. 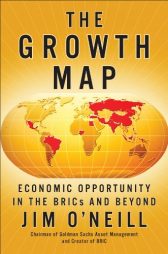