Climbing Your Own Everest: What it Takes to Get to the Top

No Mountain Too High: Challenging Change with Adventure Attitude

Straight to the Top and Beyond: Nine Keys for Meeting the Challenge of Changing Times

Meeting the Challenge of Change

John Amatt’s Key Accomplishments Include . . .For over 30 years, John Amatt has led expeditions to remote regions of Northern Norway, Peru, Nepal, China and Greenland. He has explored areas of the Arctic on six occasions, making many first ascents of previously unclimbed peaks. At the age of 20, John Amatt spent two weeks lashed to tiny ledges while making the first-ever ascent of Europe’s highest and steepest mountain precipice – the 5000 foot “Vertical Mile” Troll Wall in Norway.

Later in 1981, John Amatt was a leader of the 1st Canadian mountaineering expedition to Western China, which made an ascent of 24,757 ft. Mount Muztagata – the highest peak in the world to have been ascended and descended entirely on skis.

John Amatt also fulfilled a lifelong dream by organizing and taking part in Canada’s first successful expedition to reach the top of the world – the 29,028 ft. summit of Mount Everest, the world’s tallest mountain.

John Amatt knows about tough times and the value of struggle in bringing out the best in teams of people! As a leader of an Everest team, which suffered four tragic deaths in two unpredictable accidents before putting six climbers on top of the world, his experience on Everest taught him about the danger of falling into the trap of complacency and the importance of always questioning the status quo in seeking new ways of succeeding in a rapidly changing world. He is the perfect speaker to assist your team in navigating through the turmoil of today’s global economic crisis.

More About John Amatt . . .
An educator by training, John Amatt has delivered more than 1,800 keynote presentations and seminars to total audiences of over 1,000,000 people in 44 countries around the world. John Amatt’s mission is to encourage people to push beyond their self-imposed limitations, to be more personally accountable for their own actions, and to embrace effective teamwork by valuing the contribution of others.

In his book, Straight to the Top and Beyond, John Amatt uses the metaphor of adventure to develop a nine-step approach for scaling the heights in today’s unpredictable and rapidly-changing global business environments.

“You have left us with a clear vision of what will be required of our managers, present and future: Commitment, resourcefulness, endurance, flexibility to meet the challenge of change, and above all, the courage to keep a clear perspective of the goals in spite of any adversities.”

“You were FANTASTIC, POSITIVE, and MOTIVATIONAL. You were everything we expected you to be. The audience loved you and admired you and received you with great pride as evidenced by the thunderous standing ovation.”

“We would like hereby to attest that Mr John Amatt made on September 21st a presentation to the Casablanca YPO Chapter on the subject “Straight to the Top and Beyond “. On a scale of 1 to 10 , we would rate it a 9.8. It was indeed a great experience to attend John Amatt ‘s talk . How his own experience as an adventurer and climber can be applied to the present turbulent business environment was of great value and he is a very gifted storyteller. We strongly recommend him as a keynote speaker.”

“After attending the John Amatt’s presentation to the Cairo chapter of YPO … I appreciate how one has to make decisions under a sharp edge and ultimately realize that team work is how it all works out. John’s talk is narrated with the same enthusiasm as if it were only yesterday that he mounted Everest and his wisdom in using metaphor to relate his experience to business and all situations of life is just fantastic.” 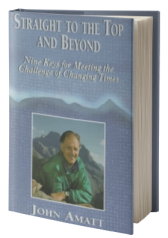