Jon Gruden is a top sports and leadership speaker, head coach of the Oakland Raiders, Super Bowl winner, former ESPN NFL analyst, and bestselling author. He was the youngest head coach in the NFL at age 34 upon his initial hire by Raiders Owner Al Davis in 1998. As head coach of Tampa Bay Buccaneers, he was named Coach of the Year and won Super Bowl XXXVII.

Jon Gruden is a sports and leadership speaker, head coach of the Oakland Raiders, Super Bowl winner, former ESPN NFL analyst, and bestselling author. He was the youngest head coach in the NFL at age 34 upon his initial hire by Raiders Owner Al Davis in 1998. As head coach of Tampa Bay Buccaneers, he was named Coach of the Year and won Super Bowl XXXVII. From 2009-2017 he worked as an ESPN NFL analyst, earning 7 Sports Emmy nominations before returning to the Oakland Raiders as head coach. His book Do You Love Football?! Winning with Heart, Passion, and Not Much Sleep, written with longtime NFL writer Vic Carucci, was a New York Times bestseller.

In his first NFL stint, Gruden was a highly successful NFL head coach for 11 seasons with the Oakland Raiders (1998-2001) and the Tampa Bay Buccaneers (2002-08). He compiled a winning record of 100-85 and led his teams to five division titles. Gruden’s best season was 2002 when the Buccaneers finished the regular season 12-4 and captured the Super Bowl XXXVII title with a 48-21 victory over the Raiders, the team Gruden held build and had coached just one season earlier. At the time, the championship made then 38-year-old Gruden the youngest head coach ever to win a Super Bowl.

Gruden has received many accolades in and out of football. He was named one of People Magazine’s “50 Most Beautiful People in the World” in 2001 and was the first non-player ever invited by the Walt Disney Co. to star in its popular post-Super Bowl “What’s Next?” commercial (with quarterback Brad Johnson) after leading the Buccaneers to a Super Bowl title in 2003. For coaching, he was the recipient of the 2002 Coach of the Year honor at the ESPY Awards and Professional Coach of the Year at the 37th Victor Awards in 2003.

Gruden joined ESPN in 2009 as an analyst for Monday Night Football and contributed analysis year-round on ESPN’s platforms, earning seven Sports Emmy nominations. In addition to Monday Night Football, Gruden was part of ESPN’s annual NFL Draft coverage and his Gruden’s QB Camp series became one of the network’s most anticipated programs each year.

Gruden was raised around football: his father, Jim, was an assistant coach at Indiana University (1973–77) and at the University of Notre Dame (1978–80). Jon played baseball, basketball, and football in high school and then moved on to the University of Dayton, Ohio, where he played quarterback for three years.

He began his coaching career as a graduate assistant at the University of Tennessee (1986–87) and was an offensive assistant for other collegiate football programs before joining the staff of the San Francisco 49ers of the National Football League (NFL) in 1990. In 1991 Gruden returned to the collegiate level at the University of Pittsburgh, but in 1992 the NFL’s Green Bay Packers hired him as their wide receivers coach. Three years later he became the offensive coordinator for the Philadelphia Eagles. Gruden’s rapid ascent up the coaching ladder culminated in 1998, when he was named head coach of the Oakland Raiders. 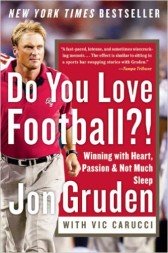 Super-Bowl-winning head coach returns to the Raiders football franchise. Jon Gruden is back. In a full-circle, head-spinning move, Jon Gruden...