You Must Be Present to Win: The Path of Continuous Improvement

Today’s competitive global marketplace offers make-or-break opportunities and challenges unlike ever before. High performing personnel including corporate executives, sales forces, and creative teams, need be at their best. That means preparing with clear commitment and ...

Today’s competitive global marketplace offers make-or-break opportunities and challenges unlike ever before. High performing personnel including corporate executives, sales forces, and creative teams, need be at their best. That means preparing with clear commitment and composure, consistently performing with focus and intensity, and responding efficiently and effectively. These are the secrets to peak performance.

The simple but powerful practice of mindfulness enhances the ability to stay focused and relaxed in the flow of the present moment. It enables individuals to generate success-oriented mindsets, avoid psychological pitfalls, and be more productive in the workplace. Proven to reduce stress and enrich the quality of experience by both ancient Eastern wisdom and modern Western science, mindfulness is the key to continuous improvement.

The path of continuous improvement is the way to foster greater personal and interpersonal self-awareness, essential elements of communication, teamwork, and life-long learning. This path inspires the ideal attitudes and supportive behaviors that are the sources of wellness, prosperity, and happiness in business and life.

The Art of Leading a RICH Life

— Get Out of Your Own Way and Reach Your Goals

— The Power of Intention and Awareness

— The Secret to Better Relationships in Business and Life

Dr. Joe Parent is a world-renowned expert in Performance Psychology, working with athletes, actors, artists, and executives. He offers a unique blend of modern western psychology and ancient eastern wisdom, helping people in all walks of life achieve success through peak performance principles.

A distinguished PGA TOUR and LPGA Sports Psychologist/Instructor, Dr. Parent has worked with major champions and many other top professionals. He has the singular distinction of coaching both a man (Vijay Singh) and a woman (Cristie Kerr) to reach the #1 World Ranking. Golf Digest Magazine includes Dr. Parent in their list of “Top Mental Game Experts in the World.”

His first book, the #1 best-seller ZEN GOLF: Mastering the Mental Game, has over a million copies in print, digital, and audio formats world-wide in ten different languages.  Golf Digest reviewers call it “highly original and exciting, a book that has become a classic. One of the best golf books of all time.” He has also gotten rave reviews for his recent works, ZEN TENNIS: Playing in the Zone, THE BEST DIET BOOK EVER: The Zen of Losing Weight, and A WALK IN THE WOOD: Meditations on Mindfulness with a Bear Named Pooh.

Dr. Parent teaches in southern California at the Ojai Valley Inn and Spa Resort. He also offers lessons and executive coaching by telephone, Skype or Facetime to students all over the world. For more information, please visit his website at DrJoeParent.com.

“Your program was full of great ideas to help our advisors grow as people and professionals. It was a real hit.”

“Doc has been a great influence on my mental game. He has given me very effective methods for working with thoughts and emotions. It really helps, and you’re going to enjoy it!”

“We admire Dr. Joe and appreciate the lessons he has taught us in golf and life through his friendship and his writings. He conveys his wisdom to all in a simple and beautiful manner.” 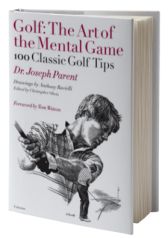