Joseph Teti is a top leadership keynote speaker and veteran of both US military and US government special operations units. He is a former Force Recon Marine, Army Special Forces “Green Beret”, and a former operative in a highly classified government counter-terrorist unit. As co-star of the show Dual Survival on the Discovery Channel, he has survived in every climate and terrain on the planet.

Crisis Preparedness and Awareness from a Special Operations Veteran

10 Key Characteristics of a Great Leader

How to Build Effective Teams

Situational Awareness and the Color Codes of Awareness

Teti is a combat veteran of both OIF (Operation Iraqi Freedom) in Iraq and OEF (Operation Enduring Freedom) in Afghanistan. He planned and conducted a broad range of special operations missions covering the entire operational continuum. These missions gave the President of the United States an option when overt military and/or diplomatic actions were not viable or politically feasible. Operations of this nature required rapid response with surgical application of a wide variety of unique skills, while maintaining the lowest possible profile of U.S. involvement. He has participated in numerous classified direct action missions with several Tier 1 SMU’s (Special Mission Units) to include, US Army Delta Force, US Navy SEAL Team 6, British and Australian SAS (Special Air Services) Regiments and Canada’s JTF 2. Joseph also deployed for Operation Uphold Democracy and Operation Maintain Democracy in Haiti. While serving in the US Marine Corps he was meritoriously promoted twice.

He has performed high-risk PSD (Personal Security Detail) operations in Afghanistan and Iraq for U.S. government and civilian clients. He was also a member of a U.S. State Department close protection team assigned to several high profile government officials and visiting diplomats in Israel. Working out of the U.S. Embassy in Tel Aviv, and the U.S. Consulate in Jerusalem, he operated in high-risk areas throughout the country to include Ramallah, Abu Dis, Jericho, The Gaza Strip and the West Bank.

A graduate of over 30 formal schools in regards to special operations, his skill sets and experiences are highly diverse. He is both HALO and SCUBA qualified which represents less than 1% of all Special Forces soldiers. He has held a TOP SECRET-SCI with polygraph security clearance, the highest security clearance awarded by the U.S. government.

As co-star of the show Dual Survival on the Discovery Channel, he has survived in every climate and terrain on the planet….from the jungles of Sri Lanka, to the glaciers of Norway to the deserts of Oman. 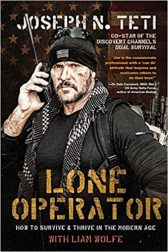