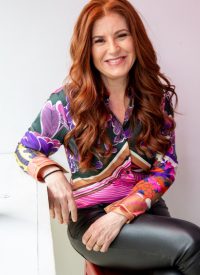 Kara has an extraordinary track record of business success. Formerly the VP of shopping and e-commerce partnerships at AOL, she grew the shopping business from a concept to more than $1 billion in revenue in less than seven years. While business was booming, she found herself tired, overweight, and simply unfulfilled.

Determined to kick her diet soda habit, Kara began slicing up fruit and putting it in her plain boring water. When she started drinking her fruit infused water, she lost weight, her skin cleared up and she had more energy. She knew she was onto something big.

After discovering there was nothing like the fruit-flavored water on the market, she decided to make it herself. When she took her idea to market she was met by “Sweetie, people like sweet,” which only fueled her passion more. On the same day her fourth child was born, Kara delivered her first 10 cases of hint water to Whole Foods in San Francisco.

14 years later, Kara is the founder and CEO of the #1 independently-owned, non-alcoholic beverage company in the United States producing water infused with fruit essences, no sugar, no diet sweeteners and no preservatives.

▪ One of Fast Company’s Most Creative People in Business

▪ One of Huffington Post’s six disruptors in business, alongside Steve Jobs and Mark Zuckerberg