POWERFUL INSPIRATIONS: Eight Lessons That Will Change Your Life.

Kathy Ireland’s Key Accomplishments Include . . .
Kathy Ireland began her career as a supermodel and morphed into what the Associated Press and London Times call “a best friend to working mothers” as women all over America embrace her designs and products.

Kathy Ireland is Chief Designer and CEO of Kathy Ireland Worldwide (KIWW). The brand was acknowledged by Women’s Wear Daily as one of “America’s Most Popular” in its category, with women 18-49. The Kathy Ireland brand is also recognized as #1 in its category for “Product Innovation in America” by the country’s leading research firm, Kurt Salmon Associates.

Kathy Ireland was honored by the National Association of Women Business Owners and received the “Entertainment Businesswoman of the Year” Award. She is the only designer in history to have an LPGA-sponsored tournament named in her honor, The Kathy Ireland Championship. KIWW’s relationship with the LPGA supports women’s athletics and education.

Kathy Ireland is a favorite guest on The Tonight Show, as well as MSNBC, The Today Show, Oprah, Entertainment Tonight, Access Hollywood and specials on E! and VH1.

More About Kathy Ireland . . .
It all started with socks. The genesis of Kathy Ireland Worldwide occurred in 1993 when founder and CEO Kathy Ireland brought her unique perspectives to American women with a collection of designer socks. Kathy was inspired to create her products after working with some of the world’s most famous designers. Kathy Ireland not only launched a successful clothing line, but also swimwear, maternity clothes, home furnishings and accessories divisions.

Kathy Ireland co-authored the book, Powerful Inspirations: Eight Lessons That Will Change Your Life. She resides in Santa Barbara with her husband and three children.

“What makes me laugh is the absolute normalcy with which Kathy looks at her thought processes, as if it’s common to enter a multi-national business environment as a young woman and become one of its leaders in a few short years. I feel embarrassed by my surprise. Who knew, is written across my face. Why would anyone shoot for anything less, is reflected in hers.”

“Ireland is on her way to becoming a cottage industry, having morphed from model to designer.” 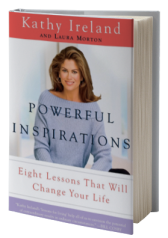