YOU Can Be the Best Negotiator in the Room: Every Great Leader is a Great Negotiator

A senior executive’s ability to negotiate is in many ways the most important skill and executive can have. In this motivational talk, Mark gives leaders the benefit of what he learned in his 30-plus years as a negotiator. Highlights of Mark’s ...

A senior executive’s ability to negotiate is in many ways the most important skill and executive can have. In this motivational talk, Mark gives leaders the benefit of what he learned in his 30-plus years as a negotiator.

Mitigating Risk in the Cloud: Negotiating the Provisions Required in Every Cloud Deal

Large enterprises and even the Global 100 are becoming increasingly comfortable with SaaS & cloud solutions. However, SaaS and cloud deals raise many complex legal issues that need to be thoroughly negotiated and documented in agreements. In this session, lawyer, author, ...

Large enterprises and even the Global 100 are becoming increasingly comfortable with SaaS & cloud solutions. However, SaaS and cloud deals raise many complex legal issues that need to be thoroughly negotiated and documented in agreements. In this session, lawyer, author, negotiator and frequent speaker on negotiating SaaS & cloud deals Mark Grossman will give you the benefit of what he learned in his 30 plus years as a negotiator. In this session Mark will speak to the unique customs, usages, and norms of SaaS and cloud deals, and the particular provisions that are critical to agreements in this area. The discussion will include issues common to SaaS and cloud agreements including intellectual property, warranties, and limitations of liability.

Mark Grossman is a keynote speaker and negotiation expert. He has made a name for himself as one of the best social media and technology lawyers in New York, winning “Lawyer of the Year” for New York City’s Best Lawyers Technology Law an unprecedented two times, once in 2016 and again for 2018. Corporate Counsel magazine has called Best Lawyers “the most respected referral list of attorneys in practice.”

Mark has also been voted by Super Lawyers to be in the top 5% of lawyers in New York for the past three years. His reputation within the legal community is one of honor and prestige, and gained him a weekly business column in the Miami Herald, as well as frequent guest appearances on television and radio shows. He has appeared on CNBC, Bloomberg TV, ABC’s “Nightline,” Wall Street Journal Radio and NPR, offering his viewpoint on topical legal issues in today’s news cycle.

Mark has negotiated deals into the hundreds of millions of dollars, including a $200+ million deal with IBM, and deals with some of the best-known brands in the world including General Electric, General Motors, Verizon, IBM, American Express, AT&T, Computer Associates, Computer Sciences, Levi Strauss & Co., Amazon Web Services, HP, Oracle, Fox News, ESPN and many other large privately held businesses and Fortune 500 companies – the list goes on into the hundreds.

He is the author of Technology Law, What Every Business (and Business-Minded Person) Needs to Know and uses his speaking talents to teach audiences how to use negotiation in both business and life.

Since 1995, Mark has spoken at over 400 events around the world. He is a sought-after keynote speaker because he brings clarity and humor to the often tedious topic of negotiation. His keynotes are focused on empowering his audience with the knowledge he gained through a lifetime’ of work in deal-making and negotiation.

“Mark Grossman has spoken at our Information Technology Alliance Collaboratives numerous times over the past 7 years. His sessions are always energetic, full of great information and well received by our members. At our most recent event in Las Vegas in December 2016, Mark presented “YOU Can be the Best Negotiator in the Room: Every Leader is a Great Negotiator. This session was the most highly rated session (4.83 on a 5-point scale) of the 30 sessions offered on our agenda. We always strive to make sure that our presenters provide actionable takeaways that our members can bring back to their businesses and Mark never disappoints by providing great content and real-world examples and advice.”

“I saw Mark at the FLGISA Winter Conference in January of 2017. The presentation “YOU Can Be the Best Negotiator in the Room; Every Great Leader is a Great Negotiator” was wonderful combination of anecdotes, tools, and techniques that helped me look at negotiating as a skill that I did possess even though if you had asked me prior to the presentation I would have insisted that I did not. Mark was as entertaining and enjoyable as he was knowledgeable in his subject matter. It is clear that he has used these techniques, not just put together some slides about others and how they used them. He engaged the audience right from the start and was very accessible for questions afterwards. All in all, I would highly recommend that if you get the opportunity to hear Mark speak that you take advantage of it.”

FLGISA Event Organizer and IT Manaer City of Punta Gorda

“Mark is a dynamic presenter whom I’ve had the pleasure to work with a number of times over the past few years. He’s a true expert in his field, but is able to communicate not only with fellow experts but the novice attorney as well. He has consistently been praised by the hundreds of attorneys who watch his programs, which carry an average 97% recommendation rating. Among the praise are a few standouts, calling Mark “enlightening,” “engaging,” and “an excellent speaker [who] made this presentation one of the best.” Still others say Mark has “a great and funny demeanor” and “presented the information in an interesting fashion,” noting that they would “literally put this material to use today.” I highly recommend working with Mark; his speaking skills are only enhanced by his professionalism and his commitment to producing excellent work.”

“As a member of the South Florida CIO Council and a part of the steering committee, I’ve had the pleasure of listening to a number of presentations from Mark on “Technology Law.” His presentation style is engaging and informative and whenever I see him on the agenda for an upcoming event I attend his session. Most recently he did a session titled “YOU Can Be the Best Negotiator in the Room: Every Great Leader is a Great Negotiator”. In the 5 years that I’ve known Mark he has helped save my employer’s a lot of headaches and money by being more contract savvy with our technology vendors. It’s so much better to get an education from an experienced technology lawyer than to rely on expensive lessons learned! Thanks to Mark for all that you have taught me and will inevitably teach me in the future. If you have a chance to see him present somewhere don’t miss it.”

Mark Grossman recently spoke at the Tampa Bay Chapter of the Society of Information Management on October 12, 2017.  His title was: “YOU Can Be the Best Negotiator in the Room; Every Great Tech Leader is a Great Negotiator.”  The audience was captivated by Mark’s command of the stage – balancing invaluable insights on negotiations with a light sense of humor that made his message salient and engaging. It was a pleasure working with Mark in planning his presentation, coordinating logistics and observing a master on stage.  I would highly recommend Mark as a speaker and teacher for one of his many highly valuable topics.  I took copious notes during Mark’s presentation and have been thinking about numerous ways to leverage his techniques and strategies since listening to his wisdom.

Mark spoke to a group of CIO’s and senior IT leaders as part of the Tampa Chapter of the Society of Information Management on October 12, 2017 on how “YOU Can Be the Best Negotiator in the Room; Every Great Tech Leader is a Great Negotiator.” He was funny, creative and provided a “no nonsense” approach that can be used as a guide to ensure you negotiate the best outcome.

Most contracts for IT services are terrible. That was my first takeaway from Mark Grossman’s lively and entertaining talk “Negotiating SaaS deals Painlessly” at the NJ Society for Information Management (SIM) on March 9 in Morristown, NJ. Mark is a New Yok City lawyer who specializes in technology issues. His talk covered a wide range of timely and important topics for CIOs, such as the ownership of your data in the cloud, negotiating service levels, and finding the right balance between risk and cost. Mark used many cases of real contracts that included “gotchas,” giving NJ SIM members important practical advice on dealing with IT vendors. Although vitally important for modern IT operations, IT service contracts seems like it would be a very dry topic, but Mark’s wit and audience engagement made it an enjoyable as well as informative evening. I highly recommend this talk! 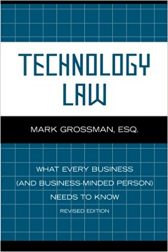