Founder and Chairman at Tiger 21

Michael W. Sonnenfeldt is the Founder and Chairman of TIGER 21 LLC, the premier network of peer-to-peer learning groups for high net worth wealth creators across North America, most of whom are former entrepreneurs who have sold their businesses or had substantial liquidity events. TIGER 21’s 500 members collectively manage approximately $50 billion in personal assets.

Until August of 2017, Mr. Sonnenfeldt was Chairman of Canadian publicly traded Carmanah Technologies Corp., that designs, manufactures and distributes solar powered signaling and lighting systems for infrastructure applications globally.  During his 4 year term, the company’s stock rose 5 fold from its low and the market cap of the company rose from under $10 million to over $100 million (Canadian).

Mr. Sonnenfeldt was the Founder of Emmes & Company which he grew to $1 billion in Real Estate Assets during the 90’s.  His partners enjoyed a 38% IRR during his tenure, and he sold his interest in Emmes in 1998

His first major Real Estate development was the 2.4 million sq ft Harborside Financial Center in Jersey City, NJ, which commenced in 1982 and was the nation’s then largest commercial redevelopment at the time.

Mr. Sonnenfeldt is Phi Beta Kappa and received his Bachelor’s and Master’s degrees from MIT’s Sloan School of Management.  He has received an Honorary Doctorate from Ben Gurion University of the Negev.

Mr. Sonnenfeldt is a passionate sailor, photographer and dabbles as a designer of clothing generally based on his own photographs or textiles from Japan.

“Like no one else, Michael has his finger on the pulse of wealth creation and the resulting inter-personal complexities.  I am grateful for one of the most creative and contemporary perspectives our clients have heard in years.”

“Michael Sonnenfeldt’s keynote at our Impact Capitalism Summit was fabulous.  He is articulate, thoughtful and a leader in the investment community.  We were so very honored to have him as our featured presenter.  I believe that his role at our event allowed us to reach the next level as a company and international thought leader.”

“Starting a business is extremely difficult. Succeeding is even harder. And while there are no substitutes for hard work and good luck, there is a lot that entrepreneurs can learn from people – like Michael Sonnenfeldt – who have known both success and failure.Think BIGGER offers a wealth of wisdom.”

“Whether you are a successful entrepreneur or just starting out, Michael Sonnenfeldt’s book, Think BIGGER, shines a light on the often misunderstood challenges and lessons every business person should know. Wherever you are in your journey, read this book closely and you will be on the road to understanding what it takes to start a business, to compete, and to win.” 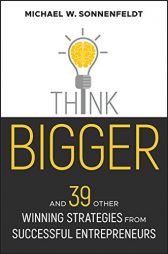