Leadership Development for Executives and Women

Minda is a California girl, who grew up in Chicago and today calls New York City home.

In addition to her passion for helping women of color secure their seat at the table, she’s also a lover of grits and rap lyrics.

Minda is, among many other things:

In addition to the above, she also recently added author to my titles. Midna’s debut book, The Memo, is set for an August 20, 2019 release date with The Hachette Book Group-Seal Press.

Minda has been featured in Forbes, CNBC, The Guardian, The Washington Post, and Fast Company. She holds a Bachelor’s in Communications and a Master’s in Business Administration.

“Thank you for helping to create an atmosphere of vulnerability and authenticity where people were able to share and learn. We really appreciated your presence.”

“Minda is amazing! The session was very thought-provoking. She really made everyone feel as though it was a “safe space” which is something we need in our office. I especially love her flexibility to come in on such short notice. Would definitely recommend!” 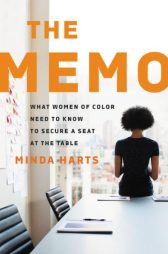