The Man Who Listens To Horses: A Message of Change

Horse Sense for People: The Man Who Listens to Horses Talks to People

Monty Roberts’ Key Accomplishments Include . . . Monty Roberts is, as they say, the real horse whisperer. By the time he was seven years old, Monty Roberts knew that he wanted to work with horses for a living. An experienced rider, competing in horse shows since age four, he began to understand how horses communicate by observing wild mustangs on the Nevada range. How Monty Roberts progressed from child rodeo star to horse trainer for Queen Elizabeth II is an inspiring story of quiet persistence in dealing with an abusive father, losing his first horse, and facing rejection and ridicule because of his unique, nonviolent training methods. Surprisingly, though, it took him long years to persuade most of the humans in his life that pain and punishment are not the way to go. Monty Roberts is far more practical than mystical. Instead of portraying himself as an equine messiah, he’d rather share his hard-won knowledge.

You’re more likely to find Monty Roberts speaking to incarcerated youth in a juvenile detention facility, gentling his 15,000th horse at a demonstration commanding thousands of attendees, patiently teaching his techniques to the growing number of students at his ranch in California, or advising executives at Fortune 500 companies who believe Monty Roberts’ horse training philosophies can—and should—be applied to the workplace.

Monty Roberts is an extraordinary man who has led an extraordinary life. An Award-winning trainer of championship horses, best-selling author, Hollywood stunt man, foster dad to 47 children (in addition to his own three), and creator of the world-renowned and revolutionary equine training technique and philosophy called Join~Up®, Monty Roberts could now, in his later years, be resting on his considerable laurels. But that’s not his style. It never has been. Monty Roberts has won countless awards and received immense worldwide press coverage, put three books on the prestigious New York Times best-seller list, trained Queen Elizabeth II’s equestrian team in London, and been awarded an honorary doctorate from the University of Zurich.

But if you go looking for Monty Roberts, you won’t find him lounging in his favorite chair high up in the hills overlooking his beautiful horse-training farm. Displaying the drive and commitment that has made audiences throughout the world stand up and take notice, the “man who listens to horses” is more likely to be found somewhere on the globe continuing to spread his message of nonviolence.

Corporate executives, educators, psychologists and experts who work with victims and violent victimizers, autistic children or in the field of substance abuse, study Monty Roberts’ methods to learn how they might apply these same trust-based communication and training principles to their own work. In Monty’s experience with over 250 major companies, he has seen the same dynamics at work, time and time again.

Why have millions of people from all walks of life responded to Monty Roberts’ PBS television shows, books, demonstrations, and media appearances with such emotion and passion? What makes Monty Roberts’ message so compelling that everyone from the C.I.A. to Volkswagen has invited this unassuming man of humble origins to share his experiences with their executives and leaders?

Perhaps it comes from the undeniable power of personal experience, of having witnessed far too many horses “broken” in abusive but traditional methods. Perhaps it’s having survived a violent childhood himself. Monty Roberts’ bones might have been broken as a child, but his spirit never was. With the energy and enthusiasm of a man half his age, Monty Roberts gets up every morning, most often in a hotel in some town far away from his home, his horses, his staff, and his beloved ranch, to keep talking . . . and listening. Humble as ever, Monty Roberts still says his only goal is “to leave the world a better place than I found it, for horses and for people, too.”

More About Monty Roberts…
Roberts first “listened” while observing wild mustangs in Nevada as a young boy. Sent there to round up horses for the Salinas Rodeo Association’s Wild Horse Race, he spent hours silently watching the feral horses interact with each other. Soon he realized that they used a silent but powerful language to communicate, set boundaries, show fear and express annoyance, relaxation or affection. In a moment that would change his life and the lives of horses and people forever, Monty Roberts understood that utilizing this silent language would allow training to commence in a much more humane manner, encouraging a real partnership between horses and humans. Later, he would name this moment of partnership “Join~Up” and it would become the foundation of all Monty Roberts’s work with horses and people.

Monty Roberts had grown up watching his father and other men “break” horses using traditional methods involving pain, control, fear and coercion. Determined to test his insights into the nature of horses, young Monty tried out some of his new ideas and was promptly and soundly punished for daring to suggest his father’s methods were wrong. But his father’s control and abuse never deterred Monty Roberts from his vision and from becoming a champion stock horse rider and horseman.

Hollywood soon came calling as Monty Roberts’ stature and talent made him a natural “stand-in” rider and stunt double for stars such as Elizabeth Taylor in National Velvet and many other films. He was even hired to work with James Dean during the pre-production and filming of the acclaimed movie East of Eden. Monty Roberts knew that his future lay in working with horses, and he commenced an incredible career in Thoroughbred racing. Throughout the years he worked with many champions (including the famed “Alleged”) and opened a training facility, on 154 acres in the Santa Ynez Valley. As Monty Roberts and his wife, Pat started their own family of three, over the years the couple also took in 47 foster children. Many of them still return for visits, and they credit Pat and Monty with turning around their lives.

The direction of Monty Roberts’ life was once again changed when a phone call came from the offices of Queen Elizabeth II, of England – an avid horsewoman. The Queen had heard about Monty Roberts’ work and invited him to come and show her staff his Join~Up® method. The Queen was so impressed by his demonstration, she urged him to write a book. That book became The Man Who Listens to Horses which became a full-blown phenomenon. The book went on to sell an astonishing 5 million copies. Suddenly, Monty Roberts and his training methods were in high demand. The phone lines were jammed at the farm and the media was breathless to get an interview; but more importantly, hundreds of thousands of horse lovers heard the message that there was another way.

Monty Roberts hit the road and hasn’t turned back. The PBS and BBC television networks aired documentaries about his work, several more books were published and became bestsellers, and countries throughout the world translated the materials, creating an international clamor for his message that violence is never the answer. Over the past several years, Monty Roberts toured the United States and has raised more than $1.6 million for horse related charities, including 4-H and the North American Handicapped Riding Association.

These days, Monty Roberts is still doing Join~Up® demonstrations all across the globe and his nonprofit organization is gearing up to make his message available for generations to come.

“I just wanted to personally thank Mr. Roberts for his recent keynote address and sessions at the Texas Speech Language Hearing Association. You had an amazing impact upon our membership and it was a thrill for me to spend the day with you. Thank you for your non-violent work with horses and your work with foster children. You are truly a gifted man!”

“Thank you for an inspirational presentation and discussion of “Join-Up” and its human-to-human applications. Your message has direct relevance to the theory and practice of dispute resolution and was greatly appreciated by all who attended. I am sure that was obvious to you from the questions and enthusiastic response from the students. I hope you enjoyed your visit to Pepperdine and the interaction with our students. We all hope that you will be able and willing to return to share your knowledge and wisdom with future classes.”

“I just wanted to write to thank you Monty for the input and opportunity to spend two days hearing about your work and how it applies to life in general. I feel very privileged to have worked with you over those two days.” 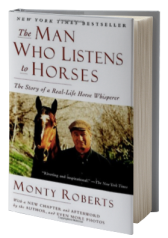