On this year’s Human Rights Day, the spotlight is on the right of all people including those who are particularly marginalised and disadvantaged – to make their voices heard in public life and to be included in political decision making. The indigenous ...

On this year’s Human Rights Day, the spotlight is on the right of all people including those who are particularly marginalised and disadvantaged – to make their voices heard in public life and to be included in political decision making.

The indigenous peoples’ movement has gone from strength to strength over the last decade. We have seen the establishment of the UN Permanent Forum on Indigenous Issues (2002) and the agreement of the UN Declaration on the Rights of Indigenous Peoples (2007), both of which have made a huge contribution to the international profile, and the practice, of indigenous rights. Just as importantly, national governments, particularly in Latin America, have made substantial progress in recognising indigenous rights and we have even seen the first indigenous President, in Bolivia’s Evo Morales. All of this was the product of the struggle by indigenous peoples themselves, who for too long had their claims ignored or sidelined, both by governments and by international organisations.

To make “peace”, we must understand “war”. Inevitably this is a complex subject and there are many theories of conflict analysis. So, it may be useful to identify some basic understandings that could be practically useful. First, to recognise that all conflicts ...

To make “peace”, we must understand “war”. Inevitably this is a complex subject and there are many theories of conflict analysis. So, it may be useful to identify some basic understandings that could be practically useful.

First, to recognise that all conflicts have logic. They are not random irrational, or unpredictable disturbances. Conflicts have winners and losers, the corollary being that it is essential to understand the interests and motivations of the stakeholders. We see this in every conflict around the world for example, most notably at present in Syria and in Sudan. Second, all conflicts have a “career”: they smoulder, flare up, die down, reignite, extinguish. But they always remain flammable. As suggested by Paul Collier’s work at the World Bank, the best predictor of future conflict is a past history of conflict. In that sense, a society that has once tasted conflict is always at risk of falling prey to it again. And memories of conflict get transmitted down from generation to generation – sometimes over hundreds of years as we saw in Serbia in relation to the Kosovo war. Conflicts come in cycles and can be perpetually recycled.

Mukesh Kapila, CBE is Professor of Global Health and Humanitarian Affairs at the University of Manchester. He is also Chair of Nonviolent Peaceforce, Chair of Manchester Global Foundation, Adjunct Professor at the International Centre for Humanitarian Affairs Nairobi, Associate Fellow of the Geneva Centre for Security Policy, Special Rep-resentative of the Aegis Trust for the prevention of crimes against humanity, and Special Adviser to Syria Relief. He was Special Adviser to the first-ever World Humanitarian Summit in Istanbul in May 2016.

Professor Kapila has extensive experience in the policy and practice of international development, humanitarian affairs, human rights and diplomacy, with particular expertise in tackling crimes against humanity, disaster and conflict management, human rights and global health and was one of the first British officials to enter Kigali at the end of the Rwandan Genocide.

His memoir “Against a Tide of Evil”, published in 2013, was nominated for the Best Nonfiction Book of that year. He is the curator of a popular blog series Flesh and Blood.

Previously he was Under Secretary General at the International Federation of Red Cross and Red Crescent Societies, the world’s largest humanitarian and development network. Earlier, he served the United Nations in different roles as Special Adviser to the United Nations High Commissioner for Human Rights in Geneva and then Special Adviser at the UN Mission in Afghanistan. Subsequently, he led the UN’s largest country mission in 2003-4 as the United Nations Resident and Humanitarian Coordinator for the Sudan, and then became a Director at the World Health Organization in Geneva.

He has also been Chief Executive of the PHG Foundation, a senior policy adviser to the World Bank, worked as part of the UN Disaster Assessment and Coordination system, and advised the UN International Strategy for Disaster Reduc-tion, International Labour Organization, UNAIDS, and many other agencies. Prior to the UN, Professor Kapila was at the UK Foreign and Commonwealth Office’s Overseas Development Administration (subsequently Department for International Development), initially as senior health and population adviser and latterly as the first head of a new Conflict and Humanitarian Affairs Department that he set up. His earliest career was in clinical medicine, primary health care, and public health in the British National Health Service in Oxford, Cambridge, and London, where he helped set up the UK’s first national HIV and AIDS programme at the Health Education Authority, becoming its deputy director.

He has initiated several NGOs, and served on the Boards of many bodies including the UN Institute for Training and Research, and the International Peace Academy in New York. He has also been a Senior Member of Hughes Hall College at Cambridge University. Professor Kapila was born in India and is a citizen of the United Kingdom. He has qualifications in medicine, public health, and development from the Universities of Oxford and London. In 2003, he was honoured by Queen Elizabeth II and named a Commander of the Order of the British Empire for his international service. In 2007, he received the Global Citizenship Award of the Institute for Global Leadership. In 2013, he received the “I Witness” award for his work on human rights, and honoured in 2014 with a special resolution of the California State Legislature for “lifetime achievements and meritorious service.” 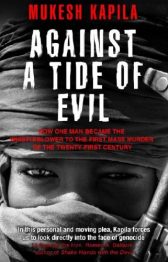