Bestselling Author of Conversations With God and Renowned Authority on Spirituality

After a crippling car accident derailed his successful career as a radio talk show host and PR/communications specialist, Neale Donald Walsch fired off an angry letter to God and, to his surprise, received an answer. By using a process he likens to “taking dictation,” Neale Donald Walsch wrote down the words conveyed to him in a soft, disembodied voice. The result was the phenomenally successful Conversations with God trilogy.

Neale Donald Walsch has become an internationally bestselling author of books on spirituality and personal development. His books have sold more than 7.5 million copies worldwide and have been translated into 37 languages. In addition to authoring the renowned With God series, Neale Donald Walsch has published over a dozen other works, including Re-Creating Yourself., Happier Than God, and When Everything Changes, Change Everything as well as a number of video and audio programs. Available throughout the world, each of the CwG dialogue books has made the New York Times Bestseller list, Conversations with God: Book 1 occupying that list for over two and half years.

Neale Donald Walsch devotes his time to spreading the messages contained in Conversations with God throughout the world. In his extraordinary keynotes, he offers a timely and provocative perspective on the current global crisis and provides essential advice on how each of us can avoid despair and repair the world.

More About Neale Donald Walsch . . .
The Conversations With God Series has redefined God and shifted spiritual paradigms around the globe. In order to deal with the enormous response to his writings, Neale Donald Walsch created a non-profit educational organization dedicated to inspiring the world to help itself move from violence to peace, from confusion to clarity, and from anger to love.

Neale Donald Walsch’s work has taken him from the steps of Macchu Picchu in Peru to the steps of the Shinto shrines of Japan, from Red Square in Moscow to St. Peters Square in Vatican City to Tiananmen Square in China. And everywhere he has gone-from South Africa to Norway, Croatia to The Netherlands, the streets of Zurich to the streets of Seoul, Neale Donald Walsch has found a hunger among the people to find a new way to live, at last, in peace and harmony, and he has sought to bring people a new understanding of life and of God which would allow them to experience that. 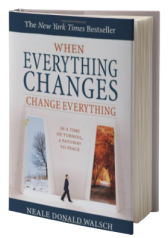