Robert Ballard is a top environmental keynote speaker, world’s foremost undersea explorer, archaeologist, author, and pioneer. In 1985, he discovered the RMS Titanic and has succeeded in tracking down numerous other significant shipwrecks, including the German battleship Bismarck, the lost fleet of Guadalcanal, the U.S. aircraft carrier Yorktown, and John F. Kennedy’s boat, PT-109.

In this visually gripping presentation, explorer speaker Robert Ballard shares his passion for the last great uncharted territory. Working closely with the National Oceanic and Atmospheric Administration (NOAA), Ballard uses cutting-edge science and technology to explore the ocean’s depths in order to better understand and preserve our waters for the generations that follow.

From perfectly preserved wooden ships lying on the bottom of the Dead Sea, to historically significant ships like the Titanic and PT-109, explorer Robert Ballard’s discoveries add to the knowledge of our past.

Robert Ballard is Founder and President of the Ocean Exploration Trust; Director of the Center for Ocean Exploration and Professor of Oceanography at the University of Rhode Island Graduate School of Oceanography. He is an Explorer-In-Residence at the National Geographic Society, Commissioner for the U.S. Commission on Ocean Policy, and a Senior Scientist Emeritus at the Woods Hole Oceanographic Institution. He served in the U.S. Navy for more than 30 years and continues to work with the Office of Naval Research. A pioneer in the development of deep-sea submersibles and remotely operated vehicle systems, he has taken part in more than 140 deep-sea expeditions. In 1985, he discovered the RMS Titanic, and has succeeded in tracking down numerous other significant shipwrecks, including the German battleship Bismarck, the lost fleet of Guadalcanal, the U.S. aircraft carrier Yorktown, and John F. Kennedy’s boat, PT-109.

He has also discovered hydrothermal vents and “black smokers” in the Galapagos Rift and East Pacific Rise in 1977 and 1979. The author of numerous books, scientific papers, and articles, he has been featured in several National Geographic television programs, including “Secrets of the Titanic” and a more recent five-part mini-series, “Alien Deep with Bob Ballard.” He was a special advisor to Steve Spielberg on the futuristic television show seaQuest DSV.  His honors include 21 Honorary Doctorates, National Geographic’s highest award, the Hubbard Medal, and a National Endowment for the Humanities Medal. He was elected a Fellow of the American Academy of Arts and Sciences in 2014.

His 1997 best-selling book, Lost Liners, tells the story of the great transatlantic liners through memorable wrecks he has visited.

More About Dr. Robert Ballard . . .
Dr. Ballard has 21 honorary degrees and six military awards. He was also a Commander in the U.S. Naval Reserve, serving in the Navy from 1967 to 1997.  He received the National Geographic Society’s prestigious Hubbard Medal in 1996 for “extraordinary accomplishments in coaxing secrets from the world’s oceans and engaging students in the wonder of science.”  In 2014, he was elected to the American Academy of Arts and Sciences. Dr. Ballard has published numerous books, scientific papers, and a dozen articles in National Geographic magazine.   Dr. Ballard also has been featured in several National Geographic television programs, including the record-breaking “Secrets of the TITANIC.”

“It was incredible! Dr. Ballard was an absolute joy to work with and the audience was captivated from the very first moment. I was hanging on to every word. His passion for science and discovery was evident in his presentation and he really inspired our audience.” 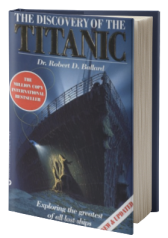