Robert Hamilton Owens is an international corporate business consultant and inspirational speaker. For more than 25 years in over 30 nations, he’s been speaking before audiences on leadership and management topics, free enterprise, and democracy issues. Some of Robert’s past clients include the Navy SEALs, New York Jets, The Baltimore Ravens, the Philadelphia Eagles, and the Philippines Joint Chiefs of Staff.

Robert was invited to address the South African Parliament, and has made five trips teaching officials in the Vietnamese Department of Foreign Affairs. He’s spoken on responsibility before 50,000 people at leadership rally for Catholic Church in Mexico City. He coached oil executive and business leaders in Beijing, China for 10 years. And he’s made 12 trips to Moscow, Russia to speak on such topics as “Developing Creative Thinking” and “Entrepreneurship” to business leaders and university students.

ROBERT SPECIALIZES IN THE FOLLOWING SPEAKING AND CONSULTATION TOPICS: 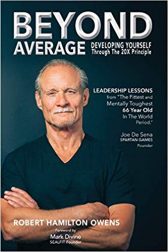