Advocating for the Rights of People with Disabilities

Self Empowerment: When Challenges Become Opportunities

The Life Story of an Immigrant Who Made US History

Turning Obstacles into Launching Pads: From Self Doubt to Self Empowerment

Rosario Marin is a compassionate mother, dedicated public official and consummate advocate for the disadvantaged who has served for 22 years at the local, state and national levels. She is the author of Leading Between Two Worlds: Lessons from the First Mexican-Born Treasurer of the United States, which details her extraordinary journey.

Marin’s professional career includes banking, non-profit organizations and the corporate world. She is a businesswoman, an author and an internationally sought after public speaker. She began her public service career while juggling family and work. Marin first served on the Huntington Park City Council and became Mayor of that city.

In 2001, Marin was appointed by President George W. Bush and unanimously confirmed by the United States Senate, to be the 41st Treasurer of the United States, making her the first immigrant to do so. During her tenure, she championed the Treasury’s financial literacy outreach program focusing on the 10 million Americans who did not yet have their own bank account. Then, in 2004, she launched her campaign for the United States Senate and was the first Latina in California ever to do so.

Marin served in Governor Arnold Schwarzenegger’s cabinet as Secretary of the State and Consumer Services Agency from 2006 through March 2009. She oversaw 17 state departments including the licensing of 2.4 million Californians in more than 255 different professions, the procurement of more than nearly $9 billion worth of goods and services, the management and development of the state’s real estate, oversight of two state employee pension funds, the collection of state taxes and programs managing the hiring of state employees.

She has held numerous leadership positions with nonprofit boards. For her contributions, Marin has been awarded four Honorary Doctorate degrees from CSULA, Whittier College, St. Francis University and Woodbury University. She is the recipient of countless awards and recognitions, including the Rose Fitzgerald Kennedy Prize given to her by the Joseph P Kennedy Foundation at the United Nations in 1995 and the Outstanding American by Choice Award given to her at the US State Department in 2008.

Thank you so much for serving the JPMorganChase community with your presence last night during Hispanic Heritage Month. We could not have heard from a more relevant speaker than you. Everyone in the auditorium and on the phone felt your passion. Your inspiration will encourage us all to reach our full potential and share the opportunity given to us.

I am very happy to report that we loved Rosario. She was just fabulous, a very impactful speaker, very sincere, told wonderful stories, and she was funny. I think the thing that impressed most everyone about her was that she definitely spoke from the heart from real tough personal circumstances, but had a lot of triumphs along the way too. There was probably not a dry eye in the house when she was finished. She was just fantastic. 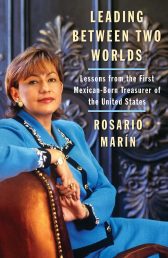