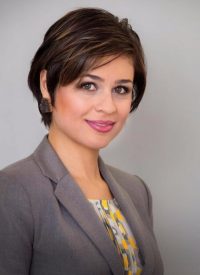 Every day we are dealing with different obstacles to reach our goals. Sometimes these hurdles look like huge mountains to climb. Getting a promotion at work, achieving your educational goals, and maintaining good relationships with our loved ones are all challenges we deal with on daily basis. We are all capable of overcoming our fears and climbing all these mountains if we believe “there is no limit to human potential, there is only limit in human belief!” This is a motivational talk to empower and inspire people to look at life differently and in a more positive way.

As an Electrical Engineer who had never climbed any mountains, I had to learn quickly how to push myself out of my comfort zone and train for the highest mountain in the world. I learned many valuable leadership skills by climbing mountains and surviving a 7.8 earthquake at 20,000 feet on Everest.  Using these new learned skills taught me how to be a better speaker, citizen, wife, and daughter.

Would you like to leave a legacy? Would you like to make this world a better place for yourself and the next generation? I discuss leadership at both the individual and organizational levels, as a purposeful, collaborative, and values-based process which results in positive social change. Youth leadership and mentorship are important to incorporate in our lives by teaching younger people to practice leadership and self-awareness from earlier stages of life.

Growing in Iran, I experienced first-hand the oppressive and restrictive environment that makes gender discrimination possible. This gave me an incentive to climb Everest to raise funds and awareness for the girls who become victims of human trafficking or are forced to get married at an early age. Coming from a patriarchal culture myself, I experienced discrimination such as, “women shouldn’t climb mountains.” In this talk, I share personal stories of breaking the glass ceiling and climbing some of the highest mountains in the world.

Five years ago, she decided to climb and summit Mt. Everest (29000ft) to bring funds and awareness for the girls who become victims of human trafficking or are forced into early marriage. In 2015, during the devastating 7.8 earthquake that hit Nepal, she survived the avalanches on Mt. Everest and came back down to help the victims and families, 10,000 of whom lost their lives and 100,000 kids lost their homes. She received the award for The Global Citizen from United Nations Association in 2015. She is a board member and director of development in Empower Nepali Girls foundation. She published her book “Follow My Footsteps” last year and dedicated it to the Nepali girls.

The avalanche and the earthquake didn’t stop her… Sara will be the first Iranian in history to climb the Seven Summits, the seven highest peaks in each continent by July 2018. She is climbing on behalf of all the women who don’t have the opportunity to live fully self-expressed around the world. She also has received the award for Outstanding Practice with Broad Impact in the area of women and leadership from International Leadership Association in 2017. She is working on a documentary film with a talented team of directors and producers who have extensive experience working on complex social justice issues.