Susan Crawford is a top technology keynote speaker, Harvard Law Professor, and Telecommunications policy & law expert. She also served as a member of Mayor Michael Bloomberg’s Advisory Council on Technology and Innovation and is now a member of Mayor Bill de Blasio’s Broadband Task Force. Crawford was formerly a (Visiting) Stanton Professor of the First Amendment at Harvard’s Kennedy School, a Visiting Professor at Harvard Law School, and a Professor at the University of Michigan Law School (2008-2010).

Fiber: The Coming Tech Revolution—and Why America Might Miss It

The Case for Net

Captive Audience: The Telecom Industry and Monopoly Power in the New Gilded Age

Susan Crawford is the John A. Reilly Clinical Professor at Harvard Law School. She is the author of Fiber: The Coming Tech Revolution—and Why America Might Miss It, Captive Audience: The Telecom Industry and Monopoly Power in the New Gilded Age, co-author of The Responsive City: Engaging Communities Through Data-Smart Governance, a contributor to Wired, and an expert in tech, public policy, and how they affect our lives. She served as Special Assistant to the President for Science, Technology, and Innovation Policy (2009) and co-led the FCC transition team between the Bush and Obama administrations. She also served as a member of Mayor Michael Bloomberg’s Advisory Council on Technology and Innovation and is now a member of Mayor Bill de Blasio’s Broadband Task Force. Crawford was formerly a (Visiting) Stanton Professor of the First Amendment at Harvard’s Kennedy School, a Visiting Professor at Harvard Law School, and a Professor at the University of Michigan Law School (2008-2010). As an academic, she teaches Internet law and communications law. She was a member of the board of directors of ICANN from 2005-2008 and is the founder of OneWebDay, a global Earth Day for the internet that takes place each Sept. 22. She is one of Politico’s 50 Thinkers, Doers, and Visionaries Transforming Politics (2015); one of Time magazine’s Tech 40: The Most Influential Minds in Tech (2013); one of Prospect magazine’s Top Ten Brains of the Digital Future (2011); and one of Fast Company’s Most Influential Women in Technology; IP3 Awardee (2010). Crawford is a sought-after keynote speaker for tech conferences, universities, trade associations, policy arenas, and local city government and civic groups across the country.

In Fiber, the follow up to Captive Audience, Crawford explains how the world of fiber optic connections reaching neighborhoods, homes, and businesses will represent as great a change from what came before as the advent of electricity. The virtually unlimited amounts of data we’ll be able to send and receive through fiber optic connections will enable a degree of virtual presence that will radically transform health care, education, urban administration and services, agriculture, retail sales, and offices. Yet all of those transformations will pale compared with the innovations and new industries that we can’t even imagine today. In a fascinating account combining policy expertise and compelling on-the-ground reporting, Susan Crawford reveals how the giant corporations that control cable and internet  access in the United States use their tremendous lobbying power to tilt the playing field against competition, holding back the infrastructure improvements necessary for the country to move forward. And she shows how a few cities and towns are fighting monopoly power to bring the next technological revolution to their communities.

In Captive Audience Crawford shows why Americans are now paying much more but getting much less when it comes to high-speed Internet access. Using the 2011 merger between Comcast and NBC Universal as a lens, Crawford examines how we have created the biggest monopoly since the breakup of Standard Oil a century ago. In the clearest terms, she explores how telecommunications monopolies have affected the daily lives of consumers and America’s global economic standing.

In Responsive City Crawford highlights the promising intersection of government and data through vivid case studies featuring municipal pioneers and big data success stories from Boston, Chicago, New York, and more. She provides the ultimate resource for public officials, government staff, and civic leaders to understand how to leverage new technologies and data platforms to fulfill the promise of effective and efficient local government.

Susan Crawford received her B.A. and J.D. from Yale University. She served as a clerk for Judge Raymond J. Dearie of the U.S. District Court for the Eastern District of New York, and was a partner at Wilmer, Cutler & Pickering (now Wilmer Hale) (Washington, D.C.) until the end of 2002, when she left that firm to enter the legal academy. Crawford lives in New York City and Cambridge, MA.

“Susan Crawford is an exceptional public speaker, and we were fortunate to have her deliver the keynote address at our 2018 Annual General Meeting. Not only is she a dynamic, knowledgeable and captivating presence on stage, but she has the rare ability to take her area of expertise and tailor it to our audience of insurance industry executives. Her address truly resonated with attendees, generating an animated Q&A period and a great deal of conversation during the cocktail reception that followed. I would recommend her to any group.” 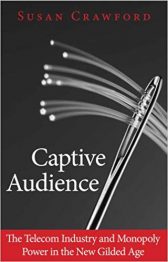 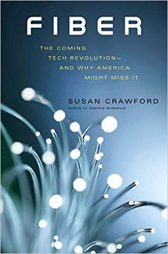