Terry Savage is a top finance speaker, a nationally known expert on personal finance, and a regular television commentator on CNN, CNBC, PBS, and NBC on issues related to investing and financial markets. She is the nationally syndicated Chicago Sun-Times personal finance columnist.

Terry Savage is a nationally known expert on personal finance and a regular television commentator on CNN, CNBC, PBS, and NBC on issues related to investing and financial markets. She is the nationally syndicated Chicago Sun-Times personal finance columnist.

Terry savage is the author of The Savage Number: How Much Money Do You Need to Retire? It has received praise from investment gurus like James Cramer, Jim Rogers, and Bob Brinker. Terry Savage offers advice ranging from investments to withdrawal calculations to long term care insurance –to make sure your money lasts as long as you do!

Terry Savage’s previous best-seller, The Savage Truth on Money, was named one of the “ten best money books of the year” by Amazon.com, and was made into an hour-long television special which aired on PBS. Terry Savage is a frequent guest on national radio and television shows ranging from PBS’ Nightly Business Report to CNN and CNBC. She’s appeared several times on the Oprah Winfrey Show and she’s the regular substitute host of the nationally syndicated Bob Brinker radio show on ABC radio.

More About Terry Savage . . .
Terry Savage’s financial expertise comes from experience. She started her career as a stockbroker, and became a founding member — and the first woman trader — on the Chicago Board Options Exchange. Terry Savage was also a member of the Chicago Mercantile Exchange’s International Monetary Market where she traded interest rate contracts and currency futures. She is a registered investment advisor for both stocks and futures.

Terry Savage has won numerous awards, including the National Press Club award for Outstanding Consumer Journalism, and the Outstanding Personal Finance Columnist award given by the Medill School of Journalism at Northwestern University and two Emmys for her television work.

Terry Savage takes an active role in America’s business community. She serves on the Board of Directors of the Chicago Mercantile Exchange (NYSE) and previously served on the boards of McDonald’s Corporation for 14 years and Pennzoil-Quaker State Corporation for 5 years. Terry savage was also a recipient of the Director’s Choice Award honoring selected women who serve on America’s top corporate boards.

Terry Savage is involved in Chicago’s civic affairs, serving as a director of The Executives’ Club of Chicago, Junior Achievement of Illinois and the Northwestern Memorial Hospital Foundation. She is a Phi Beta Kappa graduate of the University of Michigan where she won a Woodrow Wilson Fellowship in American history and economics.

“(Terry) is a comprehensive and compelling guide to taking control of your financial future, from early saving and outliving your money Monte Carlo risk assessment to retiree health savings and long-term care.” 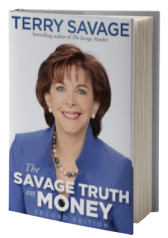