True Success: The Art of Achievement in Times of Change

We all need ideas we can trust—ideas that have stood the test of time and can help us achieve success in even the most demanding situations. Tom Morris has an unprecedented ability to bring together the wisdom of the ages in a form that people can ...

We all need ideas we can trust—ideas that have stood the test of time and can help us achieve success in even the most demanding situations. Tom Morris has an unprecedented ability to bring together the wisdom of the ages in a form that people can use right now. This talk presents a simple, powerful and complete framework of seven universal conditions for deeply satisfying, sustainable excellence in all that we do. His now-famous “7 Cs of Success” have fueled extraordinary results in pockets of excellence around the world, and have never been more important than they are today. In a high-energy and very entertaining session, Tom will reveal the most fundamental tools for personal and institutional greatness and provide a practical guide for their use every day. This talk leaves people with a new, well-grounded enthusiasm and a determination to use the wisdom they’ve been given. Once they’ve heard it, they will never be the same.

A Winning Culture: The Four Foundations of Sustainable Greatness

When you take good care of your people, your people take good care of your customers, and your customers take good care of you. The key to it all is a winning culture. So: What creates a great organizational culture? What guides and motivates us to bring our best to every challenge and work powerfully with others every day? Tom Morris shows that the answers to these questions are simple, profound, and transformational. At a time when pressures are high and companies are focusing on the discipline of execution, the main challenge is getting everyone to believe deeply in what they’re doing and to do it with excellence and care every day. Aristotle and a few other profound thinkers have revealed four foundations for reaching and maintaining the highest levels of commitment and greatness in our work with other people. In this session, Tom presents those four foundations for a winning culture and offers practical guidelines for putting into practice the greatest wisdom for sustainable greatness. This talk will give you a profound diagnostic tool whose use empowers individuals and organizations in a new way, while strengthening all your most vital relationships beyond what you could have imagined. This is a must-have framework of ideas for leaders at any level, as well as for front line people who need to form strong and resilient client relations.

Alchemy: The Power to Change

Over many centuries of the human adventure, the quest of the alchemist was to take something ordinary and create out of it something truly extraordinary. There is nothing in our time more ordinary now than the rapid pace of tumultuous change that we ...

Over many centuries of the human adventure, the quest of the alchemist was to take something ordinary and create out of it something truly extraordinary. There is nothing in our time more ordinary now than the rapid pace of tumultuous change that we increasingly face in so many ways. And there are two kinds of change: The change that happens to us, and the change that happens only because of us. How do you respond creatively and powerfully to change that comes your way? How do you best initiate change that needs to be made? As a rare philosopher who is as full of humor and great stories as he is of insights that can change your business and your life, Tom Morris will explain in this talk the changeless wisdom of the ages on dealing well with change.

Lemons to Lemonade: Stirring Change into Something Great

Difficult change comes our way on a regular basis these days. And we have an old saying about how to deal with it: “When life hands you lemons, make lemonade.” For decades, people have said this, but no one explains how to do it. The great ...

Difficult change comes our way on a regular basis these days. And we have an old saying about how to deal with it: “When life hands you lemons, make lemonade.” For decades, people have said this, but no one explains how to do it. The great philosophers did. In this highly entertaining and engaging talk, Tom Morris will equip you and all your associates to be expert lemonade makers! Some clients have themed their entire meeting around this topic and have served great lemonade during the break!

Creating the Conditions for Innovation

There are conditions in which creativity flourishes, and alternative situations in which it’s almost impossible and disappears. The culture of your company makes all the difference as to whether you will be a hotbed of innovation, or a place where ...

There are conditions in which creativity flourishes, and alternative situations in which it’s almost impossible and disappears. The culture of your company makes all the difference as to whether you will be a hotbed of innovation, or a place where anxiety, habit, and inertia rule. Tom Morris draws on the wisdom of the ages in a way that only he can do, to provide you with a simple map to a powerfully innovative culture. And since one great idea can be worth dozens or even hundreds of incremental improvements, he will use the insights of the most creative thinkers in history to show you how you can encourage not just those small innovations that improve products and services in discernible ways, but also the big breakthroughs, the great insights, the revolutionary perspectives that will keep your business flourishing, regardless of the ups and downs of the market and the general economy.

Tom Morris’ Key Accomplishments Include . . . Tom Morris has become one of the most active public philosophers in the world due to his unusual ability to bring the greatest wisdom of the past into the challenges of the present.

A native of Durham, North Carolina and a Distinguished Alumnus of Durham Academy, Tom Morris was a Morehead Scholar at the University of North Carolina – Chapel Hill, which has honored him, along with Michael Jordan, as a recipient of their “Distinguished Young Alumnus Award.”

Tom is also the author of the highly acclaimed and bestselling leadership classic If Aristotle Ran General Motors and the big yellow book, often seen in college dorms nationwide the night before final exams, Philosophy for Dummies. Other more recent books include The Art of Achievement, The Stoic Art of Living and Superheroes and Philosophy, where Superman and Batman finally meet Plato and Aristotle. Tom’s bestselling book about life and business, If Harry Potter Ran General Electric: Leadership Wisdom from the World of the Wizards, is currently bringing magic into people’s lives around the world.

Tom’s work has been featured, noticed, commented on, or covered by such diverse news outlets and media as CNN, NBC, CNBC, The Learning Channel (TLC), NPR’s Morning Edition, NPR’s Talk of the Nation, The New York Times, Fast Company, The New York Times Magazine, USA Today, Newsweek, The Los Angeles Times, The Chicago Tribune, The Dallas Morning News, The Washington Post, The Economist, Readers’ Digest, The Globe and Mail, Die Zeit, Voce:SA, L’Agefi, The Leaky Cauldron, and many other magazines, newspapers, and websites across the globe.

Tom Morris holds a Ph.D. in both Philosophy and Religious Studies from Yale University, as well as other, honorary doctorates in recognition of his public work of bringing practical philosophy back into the cultural mix.

Tom also served for fifteen years as a Professor of Philosophy at the University of Notre Dame, where he quickly became one of their most popular teachers, in many years having as much as an eighth of the entire student body in his classes. He is now Chairman of the Morris Institute for Human Values.

More About Speaker, Tom Morris. . .
He may be the world’s happiest philosopher.

Tom Morris has also appeared as the philosopher he is in Special Features on The Young Indiana Jones Chronicles: DVD Collection presented by Lucas Film, and on The Complete Superman Collection DVD. You will often see The Sage of Steel wherever wisdom is to be found.

Born Thomas Victor Morris, and known by his students as “TV Morris”, he is the first philosopher in history to appear in network TV commercials, where he has served as the national spokesman for Winnie the Pooh, Disney Home Videos. He is also the only thinker ever to engage in early morning philosophy with Regis Philbin, on his talk show, and on The Today Show with Matt Lauer, among many other national broadcasts.

Tom Morris is known for bringing the insights of the great thinkers into the drama of everyday life with high energy and good humor. His message is helping to change lives and revolutionize business practices everywhere.

“As a keynote speaker, Tom Morris is unique in his ability to listen to me as a client, really listen, and understand my needs so well that he can custom tailor his presentations for maximum positive impact. Anyone can see from his videos the combination of energy, humor, and wisdom that wins over audiences, but what’s even more important is his rare capacity to use his intellectual abilities to serve his clients in a deep and productive way. He doesn’t just show up and give a talk; he brings a customized gift to each member of his audience, a gift of just the right insights that we can use right away to make a difference in our business and in our lives. Anyone who hesitates asking this philosopher to open or close their meeting needs to talk to me.”

“Tom Morris’ message is like having Aristotle, Plato, and Socrates on your management team. Bringing the wisdom of the ages to today’s business challenges is the most innovative and important new insight I can imagine.”

“Your name has been mentioned so many times over the past few days in conversations, emails, texts, etc. I cannot tell you how much I appreciate you and all that you did for my agents, staff and management. They mean the world to me and you brightened not only their day, but their lives from this point forward.”

“Tom, you absolutely crushed it. It was great to see the people swamp you near the stage and it was a smart way to finish the program with the conference ending on your last words. I can tell you definitively that you were the highlight of the program! I look forward to working with you more in the future and would enjoy hearing about some of your personal coaching programs.” 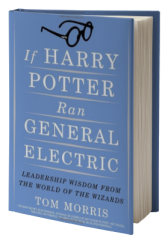