TURIA was born on the tropical island of Tahiti in the late 1980’s. Her dad, a keen Australian surfer, moved to Tahiti and immediately fell in love with the island, the waves and a beautiful woman (Turia’s future mum). The family migrated to Australia when Turia was three and ended up on the South Coast of New South Wales.

Turia studied at the University of New South Wales where she earned a double degree with honours in Mining Engineering and Science. She worked as a model before landing her dream job with Rio Tinto at their prestigious Argyle Diamond Mine and moving to Kununurra with her partner, Michael. Their lives were turned upside-down when she was trapped by a grassfire in a 100 kilometre ultra-marathon in September 2011, and suffered burns to 65 per cent of her body. For now, Michael and Turia live in the coastal community of Ulladulla, surrounded by friends and family. She spends her time training for an Iron Man, doing yoga, studying for an MBA and travelling the world giving motivational speeches.

She is a well-recognized humanitarian dedicating her time to causes that she is passionate about. Interplast is one such cause – a charity that provides free reconstructive surgery to people in developing countries. Since she became their official ambassador she has helped raised close to a million dollars for this important cause. Turia has achieved so much in her short life. She was named the NSW Premier’s Woman of the Year and she was a finalist for Young Australian of the Year.  She also graced the cover of the Australian Women’s Weekly and she is a judge for the Australian Woman of the Future Fund. Her initial memoir was published in  2013.

Turia’s tenacity, resilience and drive to beat and conquer everything left a buzz across the room that was indescribable. She is an absolutely remarkable young woman.

Amazing! I still can’t wipe the smile off my face! Such an inspiration!

Absolutely amazing and inspirational speaker. The best session I’ve had the chance to attend in my 14.5 years at General Electric! 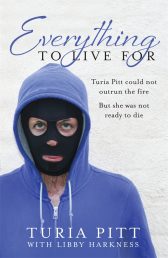