Yossi’s ‘Amazon Survival Skills for Business’ is a mesmerizing ...

Yossi’s ‘Amazon Survival Skills for Business’ is a mesmerizing storytelling session that will keep audiences riveted to the edge of their seats. However, this total absorption facilitates also a deep learning experience. Yossi’s counter-intuitive insights will expand horizons, open new dimensions and facilitates new possibilities.

What can be learned from a man who survived against all the odds in the Amazon Jungle?

Yossi Ghinsberg is a master storyteller with an epic story to share. Lost alone in the midst of the Amazon rainforest for three weeks, he not only survived, he found new meaning for his life and work. The author of the international bestseller ‘Jungle’ , now a major motion picture starring Daniel Radcliffe, Yossi was recently rated as one of the top ten speakers in the business.

His survival skills for business are designed to shift your attendees’ perspective and inspire them to always assume responsibility, taking their game to the next level. His energy is contagious – his insights mind-bending and counter-intuitive.

Yossi Ghinsberg’s Key Accomplishments Include . . .Not many people realize that survival is a choice as deeply and intimately as Yossi Ghinsberg. In the midst of the uncharted Amazon, after losing his three companions, Yossi Ghinsberg was tested to the extreme. Alone for three harrowing weeks of sheer survival against all odds, Yossi Ghinsberg ultimately lived to tell this amazing story as well as how the ordeal profoundly affected his understanding of himself and his life’s purpose. The most important thing he learned from this experience was that we all have the power to survive.

Years later, Yossi Ghinsberg returned to the Amazon and made it his home. Working with indigenous forest dwellers for three years, they built Cha-la-lan, a model eco-tourism village that inspired the entire Amazon basin and the world. Yossi Ghinsberg also founded The Madidi National Park, the biggest biodiversity conserve in the Amazon.

Yossi Ghinsberg now travels the planet sharing his universal messages of strength, hope and inspiration. His choice to connect rather than retreat has become his life’s journey. Yossi Ghinsberg serves the CEO of an Israeli / Arab Reconciliation Festival, where spiritual leaders of both Islam and Judaism conduct special prayers for peace.

Yossi Ghinsberg’s first book Heart of the Amazon (now published as Jungle) based on his harrowing adventures in South America, soon became an international bestseller. The Discovery Channel released a documentary film based on the book. Yossi Ghinsberg is also the author of Laws of the Jungle.

In times of rapid change, markets go through massive transition and in the process even the giants shake – some collapse. As fear and insecurity rise, times like these can feel like sheer survival for many. As a speaker, Yossi Ghinsberg’s permeating authenticity instills in people the power to trust themselves and engage in life fully and passionately regardless of the circumstances.

A riveting storyteller, Yossi Ghinsberg leads audiences to a deep state of listening, allowing them to experience and process the content within their own environments and thus immediately integrate it in their personal and professional life. His delivery is a powerful multi-sensory experience, evoking emotions and challenging commonly held
concepts. Yossi Ghinsberg teaches that survival is a choice…one that comes with results that may not look as we had originally expected or planned.

Yossi Ghinsberg believes that nothing promotes growth more than an unexpected experience and unconventional thinking. In these times of great challenge and change, Yossi Ghinsberg’s Power to Survive message is timely.

More About Yossi Ghinsberg . . .
Yossi Ghinsberg was born and raised in Israel. He served three years in the Israeli navy on the Red Sea, where he befriended the Bedouins of the Sinai Desert who greatly influenced him with their wholesome philosophy and nomadic lifestyle.

Yossi Ghinsberg graduated from Tel Aviv University with Philosophy and Business degrees, followed by a comprehensive study of the Kabala in academic as well as authentic environments. A truth seeker by an inner calling, Yossi Ghinsberg continuously studied religions and philosophy including the ancients, the classics, the Eastern and the Contemporary.

In 1992, Yossi Ghinsberg returned to the Amazon to initiate “The Cha-la-lan Project”, demonstrating that the best strategy to preserve pristine rainforest is sustainable development in cooperation with indigenous inhabitants, rather than mere conservation. Yossi promoted recognition of intellectual properties for indigenous people and his contribution to the region won him international acclaim from Conservation International, the World Resources Institute and The Inter-American Development Bank.

In 1995 Yossi Ghinsberg was appointed Vice President of The Center for Investigation & Treatment of Addiction (CITA). In this capacity, Yossi promoted a new humanitarian approach to the treatment of opiate addiction, establishing 12 treatment and research centers around the world from Mexico to China. Yossi Ghinsberg also established and managed his own clinics in Australia where he launched the “Alma Libre” initiative to educate society about opiate addiction and promote reintegration of rehabilitated patients.

Yossi Ghinsberg has great interest in conflict resolution on personal, organizational and global levels. In 2001 during the peak of the Palestinian “intifada”, Yossi Ghinsberg was invited to return to Israel to produce a reconciliation festival. Despite the escalation of violence in the region, the festival managed to attract spiritual leaders of Judaism and Islam as well as unprecedented audiences.

Yossi Ghinsberg is married and father to three girls. He shares his time between his home in the heart of an Australian rainforest and the rest of the world.

“Wow! Yossi’s talk was full of suspense, inspiration and elicited many emotions from our audience.”

“Many people have commented to me how moved they were by your amazing story, by your honesty, humility and the courage you showed us by sharing the impact your journey had on you as a human being. I am honored to have met you and to have had the privilege of creating, through you, a profound experience for the audience.”

“As your story is about courage, loss and challenges, it transported the listeners into your experiences, into your awakening. Your delivery was powerful and effective and you certainly had the audience with you all the way, conquered, inspired and enriched. You are in a class of your own.”

“Thank you again for presenting at our offsite. You rank number one in my experience and many of your comments will stay with me for a long time. I have told numerous people about your experience and philosophy.” 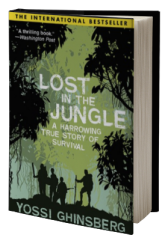