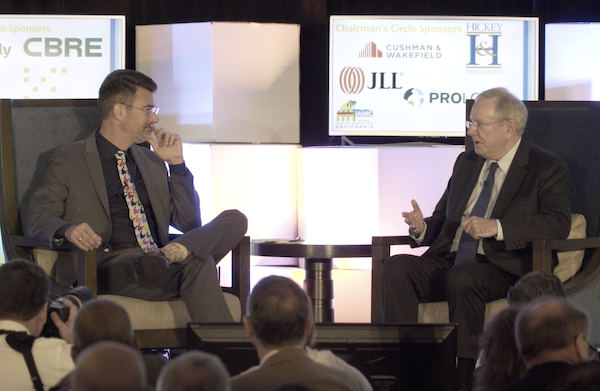 Steve Forbes Explains the Top 6 Challenges Facing the US Economy

Sometimes it’s difficult to determine which challenges to the U.S. economy are the most important. There’s so much information and every pundit has an opinion. Fortunately, Steve Forbes, editor-in-chief of Forbes business magazine and a trusted financial guru with decades of experience, has a good handle on what you should pay attention to.

In May, I had the chance to meet and listen to Forbes in person at a moderated talk he gave in Santa Barbara. During his friendly fireside chat with geopolitical expert Peter Zeihan, Zeihan asked Forbes to discuss the top challenges facing the U.S. economy in the near future. Forbes mentioned six challenges to the U.S and possible solutions.

Tariffs are just another word for sales taxes said Forbes. Tariffs are sales taxes on the foreign country and the American consumer. Instead of using tariffs that target an entire nation, governments should go after specific companies and industries by enforcing existing laws. Tariffs hurt both parties. As Forbes said, “Leave hurting each other to 50 Shades of Gray.”

The Federal Reserve should keep money stable said Forbes. The Fed operates under the debunked theory that prosperity causes inflation. The Fed says the economy is “overheating.”  As Forbes said, “If your income goes up, do you feel yourself overheating?”

If you need proof of the debunked theory, just look at our current economy. Business has boomed while inflation has remained flat. The currency solution lies in keeping the money at a stable rate so the free market can work as it should.

Our culture is obsessed with early achievement said Forbes. If you haven’t achieved “success” in your 20s, you’re a failure. However, we evolve at different rates. Many people become successful entrepreneurs when they are old as 30 or 40—even 50. Furthermore, older people shouldn’t retire from business. They should be resources and mentors for younger workers.

The rising cost of education has turned many students into a form of indentured servants. You don’t need a degree from a fancy school to be successful said Forbes. What counts is what you get out of your education (wherever you go) and what you do with it afterward.

Furthermore, college costs do not need to increase. Purdue has successfully frozen tuition for seven years and increased its number of tenured professors. They have done this by not arbitrarily raising tuition to keep pace with Ivy League schools and partnering with Amazon, for example, for lower-priced textbooks.

Donald Trump’s success in politics is no fluke said Forbes. The media focused on all the outliers and crazy people at the Trump rallies, ignoring his base. What the world did not see was the American people who felt the political system had abandoned them and were looking for something better. They wanted to be heard and Trump listened. Politicians who listen to this group will have more success in the near future.

Our healthcare “crisis” is not a quality crisis said Forbes. The care individuals receive is very good. The “crisis” is the costs of the system. Prices should not be increasing. In any other free market, better technology and improvement in services would bring prices down. In our closed healthcare market, improvements in technology increase costs.

The problem lies in how prices are decided. Healthcare pricing is determined by agreements made between the healthcare industry, insurers, and the government (via Medicare and Medicaid). It’s not determined by a free market.

The solution lies in the transparency of a free market. If there were more transparency in the prices and healthcare providers were allowed to work directly with consumers instead of the government, our prices would be more affordable.

This list of six challenges is by no means comprehensive or in depth. In case you want to learn more about Forbes’ take on your financial future and the challenges facing the U.S., check out his podcast “What’s Ahead.”