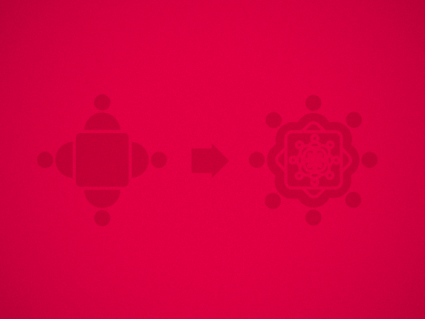 How often do you find yourself in a meeting when someone says “we need to think differently here?” We are living in a world of rapid change and surprises. “We’ve got to become more innovative” is the popular leadership response to handling uncertainty and change. But it’s not often followed up with concrete examples of what “being innovative” actually looks like.

As a result, you often see a lot of talking in circles, references to “strategy,” and a lot of “we should…” until everyone goes back to business as usual. Rather than search listlessly for something bright and shiny to inspire change, it might be more effective to fertilize the ground for new ideas in a structured way. But how? Through the use of  “strategic conversations” – problem-solving sessions specifically focused on tackling a messy-open ended challenge. No outside consultant or “chief innovation officer” needed.

Strategic conversations are not just a typical meeting with a fancy name, they are intentionally designed for exploration and discovery of new possibilities, not just updates on existing projects. They allow us to step outside of our normal headspace to rattle our creative ideas lose by combining different ideas and perspectives. And, most importantly, they never follow the traditional meeting format and often focus on full attendee participation.

When baby food maker Plum Organics CEO Neil Grimmer brought his board together to explore options for growth in early 2011, Grimmer surprised them with a very different type of discussion. He staged a “Baby Food Fight” where he asked each of the board members to assume the role of a competitive CEO and spend one hour devising a competitive plan to put Plum Organics out of business. They then proposed Plum’s response.

After one hour of independent researching and plotting, the temporary “CEOs” presented their pitches on how they’d defeat Plum, revealing new perspectives on the company’s weaknesses and possible opportunities. After synthesizing the new insights and ideas gathered, the company had an meaningful growth plan. Within a year of adopting the new direction, a much more prepared leadership team was ready to entertain and ultimately accept an acquisition offer from Campbell’s Soup Company.

2. Make a clear distinction between the present state and future options.

When it comes to our long-term benefit, we’re often better served to take a deep breath and force ourselves to separate the here and now from a longer view of success. Where do we want to be three years from now? Even one year from now? Can everyone on the team describe a concrete picture of what success looks like? And do we have the understanding of what it might take to get from here to there?

A few years ago, in response to the volatile economy and changes in customer car buying behavior, Toyota Financial Services convened their top 60 leaders to examine new business models. In a highly designed two-day off-site gathering, they used the business model canvas, a framework popularized through a global bestselling book Business Model Generation by Alex Osterwalder and Yves Pignuer, to determine which potential options to pursue.

Although they were focused on leaving the meeting with plans for the future, the execs intentionally spent the entire first day discussing the current business model to make sure everyone had a shared view of their existing model and priorities. This way, they would have a common language to make bold new choices that would stick across different departments and geographies.

On the second day, they used the same business model framework to start a new conversation to focus on future possibilities. The exact tactic isn’t important, but what does matter is using the same framework for both present and future. This allows attendees to easily draw a line on how to get from A to B. “A lot of good ideas get tossed around during off-sites, but you’re not always sure they’ll get picked up later,” says CFO Chris Ballinger. “This time, we made the ideas concrete before we left and knew how were going to take them forward. We had no shortage of volunteers who wanted to work on them in some way.”

3. Turn the meeting into a game or simulation.

War-gaming, role-playing, and scavenger hunts can also effectively amp up the heat when you need to make some big choices. Early in 2010, Kaaren Hanson, VP of Design Innovation at Intuit, designed a team-based scavenger hunt with Intuit’s top 15 executives to help them explore the future of mobile opportunities. The executives were still tied to their old-school Blackberries (sacred devices at the time) and had trouble visualizing the opportunity with more modern smartphones. After taking away each of their old devices, Hanson gave out new iPhones and Android devices to each of the teams, along with a list of different activities they had to accomplish before returning back to their base.

This orchestrated “Amazing Race” challenge included diverse tasks such as checking in on Foursquare, finding something using a new GPS app, translating a clue given in a foreign language, and scanning a label to see where it came from. Although there was a prize for the winning team, the real goal was to get the executives to experience firsthand the depth of power and possibility of the new smartphone devices. So when it came time to consider new business opportunities, mobile was no longer some far-off trend — it was happening here and now. Within the next six months, Intuit’s CEO Brad Smith was making bold statements about Intuit’s commitment to invest in mobile and cloud-based services.

When it came time to consider new business opportunities, mobile was no longer some far-off trend — it was happening here and now

To be sure, designing strategic conversations requires a lot of preparation and intention. Even if you’re not ready for a full-fledged immersive environment, your starter fuel for innovation could be as small as inviting new people to your next offsite, starting an important meeting with a personal story, intentionally framing questions in a new or provocative way, or by simply banning the usual materials like PowerPoint.

If you want to build a culture of innovation, creativity, and possibility, you have to start with how you design your most important meetings. Make them fun, participatory, and most importantly, human.

How do you go about tackling big problems with your team?