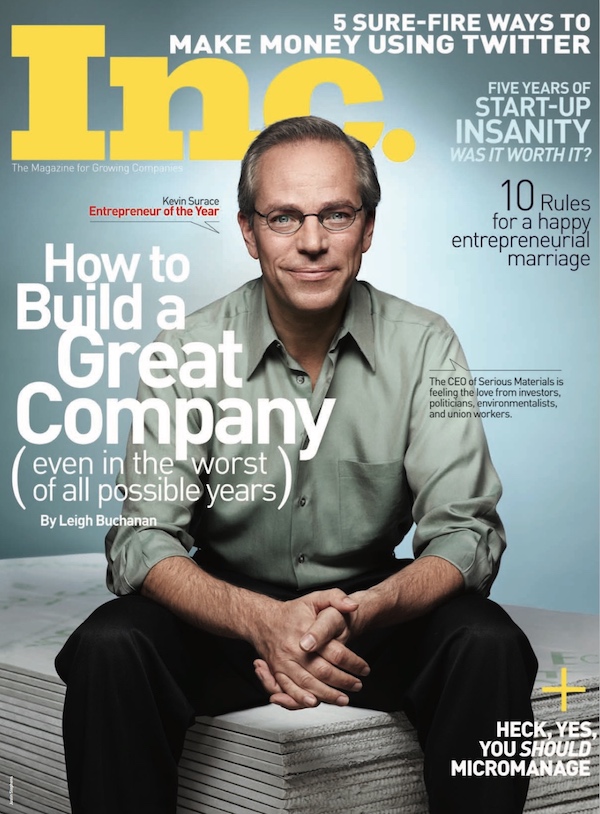 The Most Disruptive Innovator You Don’t Know About: Kevin Surace

Kevin Surace is the most disruptive innovator you don’t know about—yet. His work has influenced as many industries as Steve Jobs without all the accompanying fame, celebrity status, and bio pics. Before the iPhone and Siri were a twinkle in Jobs’ eye, Surace developed the first cellular smartphone (AirCommunicator) and the first digital assistant (Mary). All the data devices that we know and love today are thanks to the technology and patents Surace helped pioneer.

Surace is an expert at disruption and innovation and is always looking for the next problem to solve. As CEO of Serious Materials, he helped innovate in the area of clean energy, reducing the carbon footprint of building materials such as drywall and windows. The soundproof and eco-friendly drywall he helped develop, known as EcoRock, was made from recycled waste and help cut manufacturing emissions by 80 percent. The super-energy-efficient windows the company created reduced emissions from heating and cooling up to 40 percent and were used to retrofit the Empire State Building and the New York Stock Exchange.

Surace was also the co-creator of multivariate reverse auctions for B2B commerce and now has turned his attention back to A.I. as CEO of Appvance.ai. Surace’s new company is disrupting the testing of software by completely automatizing the testing process using A.I. and reducing the need for human testing of software. In addition, Surace sits on the boards of several revolutionary companies, such as COYUCHI, which is delivering disruptive retail and e-tail models featuring organic linens and providing the world’s first lifetime subscription for sheets and towels: “Coyuchi for Life.”

His work in disruptive innovation has won him many accolades: Inc. Magazine’s Entrepreneur of the Year, CNBC’s top Innovator of the Decade, World Economic Forum’s Tech Pioneer, Chair of Silicon Valley Forum, Planet Forward’s Innovator of the Year nominee, featured for 5 years on TechTV’s Silicon Spin, and inducted into the Rochester Institute of Technology’s Innovation Hall of Fame.

A true renaissance man, Surace can just as easily be found giving a rousing TED talk as conducting an orchestra in the Bay Area. He began his life in music at age five, playing percussion, concentrated in music while at Rochester Institute of Technology (RIT), and has been involved in music productions ever since.

His move to conducting orchestras happened by chance. The conductor of a production he was working on fell ill and Surace was asked to step in. He found that his CEO leadership skills and his sense of rhythm made him a natural for pulling out the best performance from players. Now his orchestra Big, Bold, and Brassy, featuring international jazz star Nicole Henry, can be found wowing audiences at corporate events.

Surace’s performance background have made him an assured and exciting presenter with his brand of “Edutainment.” Over the past decade, Surace has been a fixture at TED and TEDx talks, presenting more than 15 times, and speaking on the diverse industries he has disrupted—clean energy, automation, A.I.—and the revitalization of American industry.