Alex Banayan is a top virtual motivational speaker and the youngest best-selling business author in American history. Banayan has presented the framework from his best-seller to business conferences and corporate leadership teams around the world, including Apple, Google, Nike, IBM, and Snapchat.

Virtual Keynote: Exponential Growth Through the Third Door: How to Think Different, Transform Your Business, and Achieve Your Most Important Goals

We all face rejection. We all deal with fear. Whether it’s in our personal lives or careers, there are always dozens of obstacles holding us back from achieving our biggest goals. But it doesn’t ...

We all face rejection. We all deal with fear. Whether it’s in our personal lives or careers, there are always dozens of obstacles holding us back from achieving our biggest goals.

But it doesn’t have to be that way. There are certain mindsets and tools that can not only clear the obstacles along your path, but can also add rocket fuel to your success. After spending seven years researching and interviewing the most successful people on earth, bestselling author Alex Banayan’s widely-acclaimed Third Door™ framework can help any organization achieve its goals and radically accelerate its overall success.

In this riveting keynote, Banayan takes audiences on an unprecedented adventure, from hacking The Price Is Right to chasing Larry King through a grocery store to the multi-year quest to learn from Bill Gates and Lady Gaga. Alongside these larger-than-life stories, Banayan takes the principles from his bestselling book The Third Door and pushes them  to a whole new level, making them practical and applicable for organizations of all sizes.

This powerful presentation teaches you how to become:

This wildly-entertaining keynote is packed with insights and lessons guaranteed to transform any organization to believe that, no matter what obstacles it’s facing… there’s always a way.

The world has never been noisier. So how do you command the attention of your customers, sales prospects, or industry at-large? And once your have their ...

The world has never been noisier.

So how do you command the attention of your customers, sales prospects, or industry at-large? And once your have their attention, how do you transform those customers into lifelong advocates for you and your business?

After a decade of researching the world’s most successful leaders and organizations, bestselling author Alex Banayan uncovered what the single most underrated skill is that can radically boost the growth of any company’s sales, marketing, or business development efforts.

The secret is storytelling—but not just any kind. Banayan’s research led him to decode the keys to remarkably compelling, gripping, and emotional storytelling that can be used by businesses of all sizes to supercharge their goals. This is a specific, teachable skill set that can transform prospects into blue-chip clients and customers into evangelists, and can inject an entirely new sense of possibility into the DNA of your company culture.

Drawing from his years of research and the international success of The Third Door’s unique narrative style, Banayan distills in this keynote how anyone in your organization—from C-suite executives to your newest team members—can use these five elements to transform your business.

Because at the end of the day, everything in life and business comes down to a story. And it’s time your organization uses that to its advantage.

The pace of change in the business world is faster than ever before. It has never been more critical to an organization’s survival for teams to cultivate a DNA of resiliency, perseverance, and ...

The pace of change in the business world is faster than ever before.

It has never been more critical to an organization’s survival for teams to cultivate a DNA of resiliency, perseverance, and solution-orientated problem solving.

In this empowering keynote, bestselling author Alex Banayan masterfully decodes the most critical and elusive skills needed for any organization to cultivate the mindsets of exponential growth, particularly during times of rapid change and uncertainty.

After interviews with Bill Gates, Steve Wozniak, and dozens more of the world’s most innovative leaders, Banayan uncovered that there are fundamental skills that every organization needs—but that most people don’t talk about—to achieve their biggest goals during disruptive times. This keynote covers it all, with lessons including:

If you care about elevating your business—if you care about your employees being more resilient, more courageous, and more capable of making smart, innovative decisions—this keynote is what you’ve been waiting for.

Virtual Keynote: The Third Door for Sales: How to Re-train and Re-invigorate Your Sales Team to Find a Way Through Any Door

What happens when some of the hardest-to-reach people are your prospects? How does a sales team persevere through the inevitable onslaught of rejections? Sometimes sales pipelines feel like ...

What happens when some of the hardest-to-reach people are your prospects? How does a sales team persevere through the inevitable onslaught of rejections?

Sometimes sales pipelines feel like pipedreams. Often weeks and months are spent on a deal, only for it to fall through at the last minute. Over time, the sting of rejection can multiply until it becomes crippling.

In this empowering keynote, Banayan encourages teams to deploy new approaches to establishing relationships with leads so that you’re more than just another name in an inbox, from re-imagining prospect meetings to making a lasting impression. His presentation also sheds light on new frameworks to view rejections and failures, offering surprising insights on what to do next.

Audiences come away with practical tools to apply the Third Door™ framework to their sales process, including:

From Larry King’s interviewing secrets that help warm up prospects to Quincy Jones’ key to continued growth and success, this keynote is for any sales team serious about taking their results to the next level.

Virtual Keynote: The 5 Millennial & Gen Z Trends that will Impact the Next 30 Years of Your Business: The Surprising Insights You Need to ensure the Success of Your Organization

What will the world of business look like thirty years from now? And how will the nuanced, and often misunderstood, habits of millennials and Gen Z shape your company’s growth? ...

What will the world of business look like thirty years from now?

And how will the nuanced, and often misunderstood, habits of millennials and Gen Z shape your company’s growth?

In this wildly insightful and mind-expanding presentation, Alex Banayan—who is a millennial himself and the youngest bestselling author in American history—dives deep into topics ranging from the pervasiveness of artificial reality to the automation revolution.

Weaving in examples from an array of industries, Banayan shows us how the products that his generation is obsessed with clue us into the habits that will dominate over the coming decades. This keynote is packed with surprising lessons, including:

Whether you are a corporate executive looking to better understand your millennial employees or an investor searching for future market trends, Banayan’s keynote will provide you with the insights you want and the answers you need.


ALEX BANAYAN is the youngest bestselling business author in American history. The Third Door chronicles Banayan’s seven-year quest to uncover the definitive mindset of exponential growth and success. The book is a #1 international bestseller, has been translated into more than a dozen languages, and has been acclaimed by The New York Post as “a joy to read.”

The day before his freshman-year final exams, Banayan hacked The Price is Right, won a sailboat, sold it, and used the money to fund his quest to learn from the world’s most innovative leaders. Over the course of his unprecedented journey, Banayan interviewed Bill Gates, Lady Gaga, Larry King, Maya Angelou, Steve Wozniak, Jane Goodall, Jessica Alba, Quincy Jones, and more.

Named to Forbes’ 30 Under 30 list and Business Insider’s “Most Powerful People Under 30,” Banayan is his generation’s leading expert in high performance and personal development, having been featured in Fortune, CNBC, Businessweek, The Washington Post, MSNBC, Fox News, and NBC News.

A renowned keynote speaker, Banayan has presented the Third Door™ framework to business conferences and corporate leadership teams around the world, including Apple, Google, Nike, IBM, Snapchat, Salesforce, Delta Airlines, Kaiser Permanente, Mastercard and Disney. Banayan’s keynotes have had far-reaching effects, acting as the catalyst for a new way of thinking. The Third Door™ framework has helped individuals discover unconventional routes to achieve their biggest dreams and has aided Fortune 500 companies to take new approaches to sales, marketing, and exponential growth.

Since the publication of The Third Door, Banayan has brought his message of possibility to millions of people in more than one hundred countries. At the core of Banayan’s mission is his belief that, “When you change what someone believes is possible, you change what becomes possible.”

The feedback about Alex Banayan’s keynote has been off the charts. It was an outstanding event! Alex knocked it out of the park!

The speech was absolutely a home run. And it changed my life.

Banayan is one of the most professional and polished speakers I’ve worked with. And his talk couldn’t have gone better. His stories were enthralling, his insights were incredibly tangible, and his message was spot on.

Alex Banayan’s keynote truly cracks the code and provides the transformational edge needed to succeed in today’s business environment. Any healthcare organization that wants to achieve exponential growth and reach their biggest goals needs to implement the principles contained in The Third Door today.

Banayan’s keynote was remarkable – his underlying message of bridging your dreams to reality through grit and a ‘yes, and’ attitude really resonated with our employees around the world. He has a masterful way of bringing the audience along for a journey that encourages them to think about how to work and play differently moving forward. Out of all the speaking events I’ve planned at Ford, Banayan’s was one of the best.

As the host and keynote speaker of our annual IBM Amplify conference, Alex Banayan’s passion was exactly what we needed to energize our corporation at such a pivotal time in our transformation. Alex Banayan is the best keynote speaker I’ve seen in a long time

Alex is one of the most collaborative, inquisitive, and thoughtful people I’ve crossed paths with. I’m fortunate to know Alex and admire his natural ability to inspire and motivate others

Banayan’s keynote kicked-off our event perfectly! His charismatic personality draws you in, and then his insights and stories prove to be both immensely entertaining and deeply emotional. Whether you work in sales or marketing, every department will find tremendous value in Banayan’s keynote. On top of that, we then decided to gift copies of The Third Door to our top clients, and they all loved it. Once you start reading the book, you can’t stop. The keynote coupled with the book is magic.

For business leaders who want to inject entrepreneurial grit into their culture—Alex Banayan is who you’re looking for. His keynote was packed with hard-research, enthralling stories, and insights that created a real buzz and gave actionable steps to both employees and startup community members.

Standing ovation! Banayan’s keynote was electric. He has a way of deeply connecting with the audience in a way I’ve never seen before. He is a master speaker who makes you feel like you are with him every step along the way. Alex was so powerful on stage that we hired him again the next year.

Founder, The Powerful U Conference

When Alex Banayan spoke at my department’s off-site, his energy was contagious, his stories were inspiring, and his ideas pushed my team’s leadership. If you’re looking for someone with insight and passion, then Banayan is your man.

Banayan followed Valerie Jarrett and Arianna Huffington to keynote the Snapchat Women’s Group, and there was standing room only for his speech.  He captivated the crowd with his incredible and unique story and journey. He answered questions from the audience with candor and insight. Everyone left the session feeling inspired, empowered, and even more equipped to succeed. Ten out of ten! 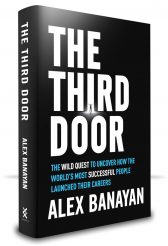