Amanda Beard made her first Olympic appearance at the 1996 Atlanta Olympic Games at the age of 14. She won silver medals in the 100-meter and 200-meter breaststrokes, and a gold in the medley relay. Amanda Beard’s young-teen manner captured the attention of the media, and she was often photographed clutching her teddy bear, even on the medal stand. Amanda won a bronze medal in the 200-meter breaststroke at the 2000 Sydney Olympics. Amanda Beard then attended the University of Arizona, where she captured an individual NCAA Division I championship in 2001.

More About Amanda Beard. . .
Amanda Beard’s modeling work has included appearances in FHM, the Sports Illustrated Swimsuit Edition, and she posed for the July 2007 issue of Playboy magazine. Amanda Beard is also a spokeswoman for Defenders of Wildlife, and enjoys interior decorating. Both of her sisters, Leah and Taryn, are swimmers.

At the 2008 US Olympic Swim Trials, Amanda Beard finished second in the 200 meter breaststroke event, and qualified for her fourth consecutive Olympics. In 2008, Amanda Beard was also elected co-captain of the US Olympic women’s swimming team in Beijing, together with Dara Torres and Natalie Coughlin.

“Amanda was highly energetic and personable – she took time to speak with whoever she encountered – she energized our audience with her persona and we feel that it was a truly memorable event because of her presence at our site!” 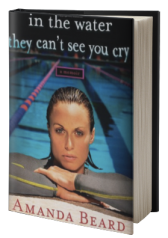