The Wolf of Wall Street -- #1 Sales Trainer in the World, Best-Selling Author, International Celebrity, & One of Wall Street’s Most Successful Investors of All Time.

“JB has trained an incredible amount of people around the world to sell, and sell well. He has helped our sales team make an incredible advancement. His event was our best ever. If you’re looking for somebody to really help your sales staff, and take them to a whole new level, we recommend highly…our friend, Jordan Belfort.”

The 5 Key Elements to Becoming a World-Class Closer

Experience the Real Wolf of Wall Street, Jordan Belfort, live and in-person as he delivers the most powerful and exciting Sales Training keynote that the ...

Experience the Real Wolf of Wall Street, Jordan Belfort, live and in-person as he delivers the most powerful and exciting Sales Training keynote that the business world has ever seen, peppered with his funny and engaging stories from his truly unique life experiences.

JB shares some highly entertaining backstories from the blockbuster Wolf of Wall Street movie, then dives into the history of his legendary Straight Line Sales System, and why he was inspired to invent it.

Then, Jordan offers an in-depth examination of: “The 5 Key Elements of Straight Line Sales and Persuasion,” including how to master your “Inner Game” and “Outer Game” for success. You will walk away from this session exhilarated, educated, entertained…and armed with the tools you need to become a world-class closer and top producer in your field.

Prepare your team for the most powerful Corporate Sales Training session the world has ever seen. Jordan kickstarts your day with one-on-one coaching, masterminding, and leadership. Then, he takes you on a deep dive into his legendary ...

Prepare your team for the most powerful Corporate Sales Training session the world has ever seen. Jordan kickstarts your day with one-on-one coaching, masterminding, and leadership. Then, he takes you on a deep dive into his legendary Straight Line Sales System. Participants learn the importance of the first four seconds of the sale, how to manage their state, gather intelligence, build rapport, and move the prospect down the Straight Line to the close!

Later, JB helps your team customize their Straight Line scripts to your specific industry, then coaches your team as everyone puts them into action, while he provides guidance and feedback. Finally, the group engages in dynamic role-playing and real-world sales situations as your new skills are put to the test!

On Day One, Jordan maps out the exact path you can follow to become a world-class closer...

On Day One, Jordan maps out the exact path you can follow to become a world-class closer and top producer in your field. He gives you the keys to his legendary Straight Line Sales System, reveals its origins, and provides some exciting backstory on The Wolf of Wall Street film. Participants learn the importance of the first four seconds of the sale, how to manage their state, gather intelligence, build rapport, and move the prospect down the Straight Line to the close!

On Day Two, Jordan dives into the advanced techniques of the Straight Line. Participants learn the crucial skills of looping and deflection, and the invaluable art of overcoming any objection. JB helps your team customize their Straight Line scripts to your specific industry, then coaches you as you and your team put them into action.

On Day Three, participants focus intently on role-playing and real-world Straight Line tactics, as you learn how to apply the most effective language patterns to your script. Jordan provides complete guidance and feedback, as actual sales situations are played out and analyzed. The day is capped off with a Q&A session with Jordan, followed by a social event, and dinner with the Wolf of Wall Street.

The Art of Straight Line Sales & Persuasion: How to create instant rapport, control the sales conversation, and close absolutely anyone who is closable.

Jordan Belfort aka “The Wolf of Wall Street” is a New York Times best-selling author, renowned motivational speaker on a global level, and the world’s #1 sales trainer.

He has created more million-dollar producers, aka more millionaires, than any other sales coach in history.

His book, The Wolf of Wall Street, was adapted into a blockbuster feature film directed by Martin Scorsese and starring Leonardo DiCaprio. And his revolutionary, one-of-a-kind Straight Line Sales System has been widely accepted as the most powerful and effective sales training system ever conceived.

In the 1990s, Jordan Belfort built one of the most dynamic and successful sales organizations in Wall Street history. During that time, he soared to the highest financial heights, earning over $50 million a year, a feat that coined him the name “The Wolf of Wall Street.”

As the owner of Stratton Oakmont, Belfort employed over 1,000 stockbrokers and raised over $1.5 billion and started more than 30 million-dollar-companies from scratch.

He’s acted as a consultant to more than fifty public companies, and has been written about in virtually every major newspaper and magazine in the world, including The New York Times, The Wall Street Journal, The Los Angeles Times, The London Times, The Herald Tribune, Le Monde, Corriere della Serra, Forbes, Business Week, Paris Match and Rolling Stone.

Along the way, he succumbed to some of the traps of the high-flying Wall Street lifestyle, going through a spectacular—and well-publicized—fall from grace. Taking invaluable lessons from the mistakes he made and the prices he paid, he has re-emerged as a globally recognized potent force behind extraordinary business success.

Today, his proprietary Straight Line System allows him to take virtually any company or individual, regardless of age, race, sex, educational background or social status, and empower them to create massive wealth, abundance, and entrepreneurial success, without sacrificing integrity or ethics.

Jordan’s two international bestselling memoirs, The Wolf of Wall Street and Catching the Wolf of Wall Street, have been published in over forty countries and translated into eighteen languages. His life story has been turned in to a major motion picture starring Leonardo DiCaprio and directed by Martin Scorsese.  Jordan’s recently released book Way of the Wolf: Straight Line Selling: Master the Art of Persuasion, Influence, and Success is a New York Times bestseller.

Jordan’s comprehensive training sessions can be structured to meet each of your specific needs. His engagements have ranged from introductory 3-hour talks, to 3-day, in-depth training programs, to ongoing consultation on how to actively and massively grow the marketing and sales results of your organization.

Using his signature direct, humorous and passionate style, Jordan will train your team on how to use the most powerful business system ever devised. The results speak for themselves.

Jordan is one of the most engaging and motivating speakers in the world today. His life experiences are truly amazing, and what he teaches about selling with the Straight Line System is simply world class. If you desire to be at the top of your game as a salesperson, don’t miss seeing Jordan speak! ”

He is an accomplished speaker with a compelling story of success, struggle and redemption. Not only does Jordan’s message motivate and inspire, but it provides empowering tools for success. I encourage everyone to get to know Jordan Belfort. His strategies for rising to the top should be a ‘must learn’ for everyone!”

“With his energy and direct presentation techniques, Jordan enables me to clear the fog of ideas and goals that I have and enabled me to crystallize my vision going forward. ”

“I had the privilege of being trained by Jordan in his Straight Line Persuasion course. Jordan is an absolute expert at the Straight Line and is able to teach the course in a way that all can grasp and see amazing results if applied. I can wholeheartedly say taking Jordan’s course has changed my life and most definitely my career like nothing I thought possible.” 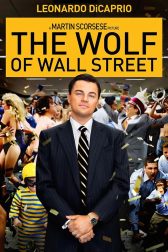 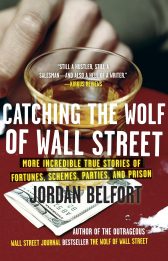 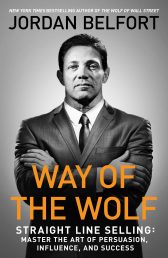 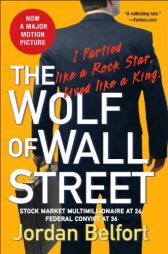