Own Your Data: Reclaiming Your Digital Life

This is a talk focused for individuals/students/public audience on how to reform your daily habits and activities to protect yourself and your data, with exciting developments on the horizon to look out for and get involved with.

Own Your Data: Leading By Example

This talk focuses on how companies and organizations can become more transparent and have a consensual and honest relationship with your customers/supporters/citizens. How do you protect their data? How do you incentivize sharing more data, but responsibly? How do you protect ...

This talk focuses on how companies and organizations can become more transparent and have a consensual and honest relationship with your customers/supporters/citizens. How do you protect their data? How do you incentivize sharing more data, but responsibly? How do you protect your company from hackers and criminal/civil liability? How will this improve, not detract from, your business model?

Own Your Data: Changing Our Digital Future for Good

This talk is very futurism focused, discussing the flawed systems in our political and commercial spaces that allowed the big data disasters to take place, and how the world’s best and brightest are working to reform these constructs to create a more transparent, ethical...

This talk is very futurism focused, discussing the flawed systems in our political and commercial spaces that allowed the big data disasters to take place, and how the world’s best and brightest are working to reform these constructs to create a more transparent, ethical and balanced society.

A fervent advocate for progressive politics at an early age, Brittany volunteered for the presidential campaigns of Howard Dean and John Kerry, and for Barack Obama’s run for senate while still in high school. In 2007, she worked full-time for a summer in the new media team of Mr. Obama’s presidential campaign, and in 2014 she volunteered for the “Ready for Hillary” campaign, before deciding to support Bernie Sanders in the Democratic primary in 2015.

Following her volunteer work for these political candidates, Brittany spent several years engaged with human rights projects around the world, including work for Amnesty International, lobbying at the United Nations and European Parliament to stop crimes against humanity, and contributing to human rights research projects in Asia and Africa.

After the fall of Gaddafi, Brittany helped establish a company to organize diplomatic conferences in Libya, on topics including trade and investment. Her primary motivation was to work on human rights issues in that country. In parallel, she started her PhD on preventive diplomacy, including studying the development of data-driven early-warning systems to prevent possible acts of genocide. She also began consulting to human rights barristers and political campaigns internationally.

These activities, together with her background in the Democratic party, caught the attention of Cambridge Analytica CEO Alexander Nix. He offered Brittany a job at the SCL Group, the then-parent company of Cambridge Analytica, as a business-development consultant in late 2014. Brittany quickly excelled at the company and was promoted to Director of Program Development, and then Director of Business Development in 2015. She left the company in January 2018.

She was the only business development and salesperson to train directly under Nix. While she was not privy to all the internal machinations of Cambridge Analytica’s activities as an employee of the company, she had access to many important and sensitive documents and communications, and was witness to a significant number of key meetings.

Brittany left Cambridge Analytica in January 2018, and in April of the same year, she testified before the U.K. parliamentary investigation on Fake News by the Digital, Culture, Media and Sport Committee, providing both verbal and written testimony and documents. For her parliamentary testimony, she was advised in the U.K. by leading human rights barrister Geoffrey Robertson QC and by Mark Stephens CBE, a leading data attorney. In the U.S., she is represented by attorneys Jim Walden and Amanda Senske of Walden Macht & Haran LLP. Jim is a former Assistant U.S. Attorney, who has significant experience representing whistleblowers.

Brittany Kaiser decided to become a whistleblower for two reasons. First, she wanted the truth about Cambridge Analytica and its activities to be exposed in the public domain. Second, she had come to the conclusion that the whole system of data brokerage was flawed and in contravention of fundamental human rights. When controversy about the company’s practices broke in the news, Brittany agreed to a preliminary debriefing by The Guardian in March 2018 as part of the news organization’s Cambridge Analytica Files investigation. She provided an initial selection of documents and information, which were the basis for a momentous story on Brexit, the Trump campaign, Facebook, and more.

Brittany’s experience with Cambridge Analytica has deepened her belief that people need and deserve greater rights over both the use and proceeds of their own data. She spends her time exploring ways to empower individuals to protect and take control of their digital rights, assets and identities for their own benefit.

Throughout 2018, Brittany offered her assistance to governments and private companies in developing policies on, and programs for, data and blockchain technologies. Before meeting with The Guardian in March, she began lobbying for bills to be passed protecting digital rights, including defining digital assets as property for each individual.  To that end, she co-founded the Digital Asset Trade Association (DATA), a 501C6 lobbying non-profit. Alongside her work with DATA, Brittany acted as an expert witness and gave testimony to investigations on the data industry, big tech and elections, around the world, helping achieve landmark decisions against data abusers and achieve changes in policy for both the public and private sector.

After her first whistleblowing interviews, Brittany started the #OwnYourData campaign, asking corporations such as Facebook to change their terms and conditions to provide transparency, opt-in and property/monetization rights over the data produced in their platforms. Brittany has joined the boards of over 10 ethical technology companies to help develop solutions that promote transparency, consent-based data sharing, data sovereignty, and cybersecurity. She has also recently joined the board of The Center for Data Privacy, which won the first case against Equifax, to help individuals protect their legal rights over their personal data and file for compensation for data breaches.

Brittany is also an author of the book with Harper Collins, entitled “Targeted: The Cambridge Analytica Whistleblower’s Inside Story of How Big Data, Trump and Facebook Broke Democracy,” released in 2019.

Brittany is considered to be an expert in the use of data, digital asset legislation, and blockchain technology. She speaks about these topics at public forums and conferences around the world to promote sustainable change and adoption of ethical principles for digital life. 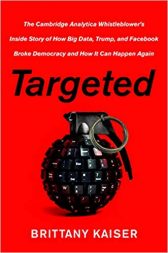