Lynn Brewer is a top corporate ethics speaker, renowned Enron whistleblower, and the creator of the Integrity Index. The foundation of Lynn Brewer’s research involves predicting the sustainable performance of public companies based upon a pattern of behaviors that have proven to exist in companies like Enron, BearStearns, Lehman Brothers and Washington Mutual.

What Can We Learn From The Enron Disaster?

The Challenge Of Ethical Leadership

Confessions of An Enron Executive

Gray Matters: Right and Wrong Is Not Always Black and White

The Economist called her “The real Enron whistleblower.” Recognized by the Nobel Peace Centre for her courage and leadership, Lynn Brewer is the founder and CEO of The Integrity Institute. She is an outspoken opponent of what she calls “Regulation Theory.” In 2002, what was seen as pervasive fraud in our capital markets was perceived yet again as a mere, albeit painful, market correction in 2007.  Lynn Brewer was in a unique position to predict both of these crashes. For nearly three years, she worked as a mid-level executive in risk management at Enron, where she witnessed numerous instances of illegal and corrupt dealings, including bank fraud, espionage, power price manipulation, and the gross overstatements to the press, public, and financial world.

After leaving the energy giant in 2000 and blowing the whistle on the company, chronicled in her 2002 autobiography Confessions of an Enron Executive: A Whistleblower’s Story Lynn Brewer presciently wrote, “Look to Enron to foretell the future.”Recognizing that human behavior drives corporate performance, in 2005, Lynn foreshadowed the crash of 2007 in a letter to Warren Buffett, on the eve of giving a keynote address to Berkshire Hathaway’s elite group of CFOs.

Today, after more than ten years of research and development, Lynn Brewer and The Integrity Institute are changing the way we rate public companies—no longer based on the next quarter’s projected performance, but by predicting whether the company’s performance is sustainable. As Nobel Prize winner Joseph Stiglitz rightly pointed out, “Standard models should be graded on their predictive ability – and especially their ability to predict in circumstances that matter. Fortunately, while much of the mainstream focused on flawed models, numerous researchers were engaged in developing alternative approaches.”Lynn Brewer is one of those researchers.

The foundation of Lynn Brewer’s research involves predicting sustainable performance of public companies based upon a pattern of behaviors that have proven to exist in companies like Enron, BearStearns, Lehman Brothers and Washington Mutual. After more than ten years of research and development, she is offering her work to the world with the release of the first-ever Integrity Index ratings–which will rate the structural integrity of every public company beginning with those listed on the U.S. exchanges.

More About Speaker, Lynn Brewer . . .
Prior to joining Enron, Lynn Brewer worked in forensic accounting and spent 18 years as a legal professional in private practice until she joined Ralston Purina where she worked in corporate development for the General Counsel and Chief Financial Officer. Since leaving Enron, Lynn has captivated audiences worldwide, providing compelling details into Enron’s rise and fall, leaving audiences shocked when they realize how vulnerable they are to becoming the next Enron.

Lynn Brewer is also the co-author of Managing Risks for Corporate Integrity: How to Survive an Ethical Misconduct Disaster. She holds a Certification in Business Ethics from Colorado State University

“You were amazing – bless you for having the courage to speak out. You have truly given me insight into the Enron disaster that I could not have possibly had without hearing you speak. “It was well worth staying to hear your story.”

Former US Secretary of Education

“We all benefited immensely from this interaction and I think you have catalyzed some serious introspection.”

“Lynn, you were outstanding! You brought so much added value to our event. Your professionalism, your command of the topic and your ability to convey genuine concern and caring were each profoundly felt by both the audience and the staff.”

“You could have heard a pin drop during your entire presentation. Your command of the audience was captivating.” 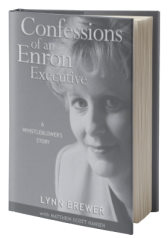