Pauline Brown is a top branding keynote speaker and former chairman of LVMH Moët Hennessy Louis Vuitton, where she provided regional leadership for about 70 brands in five sectors including fashion and leather goods, watches, and jewelry, perfume and cosmetics, wine and spirits, and selective retailing. Pauline Brown boasts unparalleled expertise when it comes to understanding why long-term financial value in today’s world rests on an ability to deliver aesthetic value.

Why are some products and companies considered “beautiful” or “cool”? What’s the difference between a million-dollar abstract painting and paint splattered on a canvas? Why do some companies experience exponential growth while others remain stagnant or even begin to ...

Why are some products and companies considered “beautiful” or “cool”? What’s the difference between a million-dollar abstract painting and paint splattered on a canvas? Why do some companies experience exponential growth while others remain stagnant or even begin to decline? How can you enhance the pull of your own brand, services, products, or spaces?

As Pauline Brown explains in this eye-opening and thought-provoking presentation, aesthetics is not just a critical component of luxury goods. On the contrary, it is critical to all companies – even those traditionally built on other advantages, like scale, share, speed, or technological edge. Here, she touches on what questions businesses need to ask themselves to remain relevant, how to measure and evaluate what’s “cool,” how to optimize your product or brand for a modern audience, and how to tap into the value of design and style. A dynamic presentation for corporations looking to reinvent their strategy or start-ups looking to create a footprint, this talk helps groups think about that intangible “it” factor in a meaningful way that generates important conversations and leaves them with practical takeaways.

For nearly 30 years, Pauline Brown has acquired, built, and led the world’s most influential global luxury brands. Most recently, she served as the Chairman of North America for the world’s leading luxury goods company, LVMH Moët Hennessy Louis Vuitton, where she provided regional leadership for about 70 brands in five sectors including fashion and leather goods, watches and jewelry, perfume and cosmetics, wine and spirits, and selective retailing. While at LVMH, Pauline also served on the board of L Capital, a private equity fund backed by LVMH, as well as on the boards of several LVMH subsidiaries including Donna Karan, Marc Jacobs, and Fresh Cosmetics. In 2016, Pauline joined the faculty of the Harvard Business School, where she introduced a new interdisciplinary course for graduate students named “The Business of Aesthetics.” In 2018, she decided to write a book based on the learnings and insights from her HBS course. The book, entitled “Aesthetic Intelligence: How to Boost It and Use It in Business and Beyond,” will be released by HarperCollins this November.

Pauline Brown boasts unparalleled expertise when it comes to understanding why long-term financial value in today’s world rests on an ability to deliver aesthetic value. Touching on the strategies that have built consumer demand and loyalty for booming brands in the age of Amazon, she explains how such companies are rewarded not only for eliciting a high degree of pleasure in those who buy their goods and services, but also for spurring desirability among others who aspire to them. Pauline focuses on helping business leaders discern, appraise, and enhance their companies by tapping into the power of their own senses—a critical and oftentimes under-developed skill set for corporate executives, entrepreneurs, and investors alike—as well as to analyze the issues and challenges of running aesthetic business from a strategic, financial, organizational, and cultural vantage.

In addition to her operational experience in the luxury goods sector, Pauline Brown also boasts a successful track record as an investor in luxury brands. Before joining LVMH, she was a Managing Director at private equity firm, The Carlyle Group, where she helped build the firm’s global consumer and retail practice, co-led deals, and served on the boards of portfolio companies including the European sportswear brand, Moncler, and the American beauty brand, Philosophy. Earlier in her career, Pauline held senior executive positions in the global beauty industry including Head of Corporate Strategy and New Business Development at The Estee Lauder Companies. There, she led all mergers, acquisitions, and licensing activities and helped to expand Estee Lauder’s portfolio from eight to 25 distinct beauty brands. She reported to the Company’s CEO and was a member of its Executive Committee. Pauline began her career as a Management Consultant at Bain & Company.

Since 2008, Pauline has been a Henry Crown Fellow of the Aspen Institute, a program that seeks to develop the next generation of community-spirited leaders. In 2013, she joined the board of the Henry Crown Fellowship Program. She also currently sits on the boards of the Parsons School of Design and is a former board member of the National Retail Federation, Fashion Group International and Cosmetic Executive Women.

Pauline received an M.B.A. from the Wharton School and a B.A. from Dartmouth College. She is a member of Wharton’s Executive Alumni Board and a former member of Dartmouth’s Alumni Council.

“Pauline Brown was amazing!!! We loved her and she was perfect for this audience!” 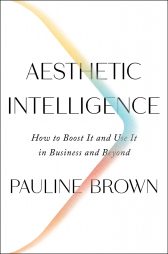