We put the MOCK in Democracy!

The Lighter Side of Politics

About Keynote Speaker The Capitol Steps

More About The Capitol Steps . . .
The Capitol Steps’ show is rip-roaring political fun. The five-to-seven-member cast is a constant transition of new costumes, props, and music. The Capitol Steps’ political satire song parodies take potshots at the outrageous goings-on in Washington and other political hot spots. Equal opportunity satirists, The Capitol Steps take aim at issues that are in the news right now – picking on Republicans, Democrats and anyone else who deserves it. The Capitol Steps treat audiences to such ditties as: Don’t Go Faking Your Smart, Fools on the Hill, Son of a Bush and more. The Capitol Steps are an unforgettable entertainment experience and ready to perform for your own convention, inaugural ball, ballot recounting party, etc.

For more than twenty-five years, The Capitol Steps have recorded dozens of albums and appeared on Good Morning America, the Today Show, 20/20, Entertainment Tonight, Nightline, CNN’s Inside Politics and numerous times on National Public Radio’s All Things Considered. 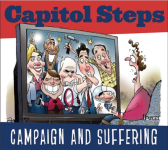