Developing a Champion Within

Chris Carmichael’s Main Accomplishments Include . . .
Chris Carmichael is the founder, CEO, and President of Carmichael Training Systems and a personal coach to Tour de France Champions. Chris Carmichael formed CTS in 1999 after spending more than two decades in the sport of cycling.

In 2004, Colorado’s Celebrate Technology Coalition named Chris Carmichael “Entrepreneur of the Year.” Soon after he was honored with the USA Cycling Lifetime Achievement Award. Chris Carmichael was inducted into the U.S Bicycling Hall of Fame in May 2003, and has been honored as the United States Olympic Committee’s “Coach of the Year.” He served as the cycling coach during the 1992 and 1996 Olympics and athletes under Chris Carmichael’s direction have won 33 Olympic, World Championship and Pan American Games medals.

Chris Carmichael has also pioneered and perfected world-class coaching methods and spawned the development of much of the technology used currently in modern coaching. 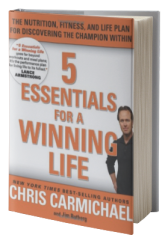