The Deep: The Extraordinary Creatures of the Abyss

Claire Nouvian is a writer and environmentalist who dedicates her career to protecting the distant and vulnerable deep sea.

While wonder drew her to the depths of the ocean, finding out about deep-sea fishing prompted her to focus on combating destructive fishing practices. She is committed to putting an end to deep-sea bottom trawling and advocates before governments and institutions in favor of the protection of the vulnerable ocean’s depths. In 2004, she founded the Paris and Hong Kong-based non-profit conservation organization BLOOM.

Claire used to work in television production and journalism, specializing in wildlife and scientific documentaries. She spent an extended period filming in the jungles of Asia, Africa, and South America and eventually contracted two severe tropical diseases. Luckily, Claire had already discovered the fascinating deep sea, so her convalescence allowed her to craft a book, The Deep, translated into 11 languages, and an exhibition of the same name, which opened in 2007 at the Natural History Museum in Paris and presents the best specimens, pictures, and film clips that have been gathered by oceanographers over the past 25 years. The book and traveling exhibition have reached more than a billion people across the world. 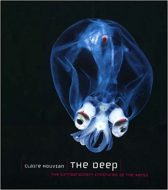