Dara is a top sports and adventure speaker and an Olympic Gold Medal Swimming Champion. As the first US swimmer to compete in five Olympic Games, Dara Torres set three World records and won nine Olympic medals, including four gold in Sydney. Dara won gold in the 400m freestyle and 400m MR and bronze in the 50m freestyle, 100m freestyle, and the 100m butterfly – this after a seven-year break from competitive swimming.

Never Give Up Your Dream

You're NOT Too Old to Chase Your Dream

“The water doesn’t know your age.” These are the prescient words of Olympic Gold Medal champion swimmer, Dara Torres. She has set three world records and has brought home twelve Olympic medals, including four gold. Dara Torres is arguably the fastest female swimmer in America. She entered her first international swimming competition at age 14 and competed in her first Olympics a few years later in 1984. Dara Torres went on to compete in the 1988, 1992 and 2000 Olympics, medaling each time. Four months after the birth of her daughter Tessa in 2006, she began training again for the Olympics. Dara Torres is the first American swimmer to have competed in five Olympics.

Dara Torres shattered all expectations when she made her record fifth US Olympic team at age 41. In her second comeback after being away from the pool for 6 years, Dara Torres became the oldest female swimmer to make the Olympic team. Competing against women half her age, Dara remained unstoppable, breaking the US record in the 50m Freestyle multiple times on her way to Beijing and coming away from the Games with three silver Olympic medals.

As the first US swimmer to compete in five Olympic Games, Dara Torres set three World records and won nine Olympic medals, including four gold in Sydney. Dara won gold in the 400m freestyle and 400m MR and bronze in the 50m freestyle, 100m freestyle, and the 100m butterfly – this after a seven-year break from competitive swimming.

In her book Age Is Just a Number, Dara Torres reveals how the dream of an Olympic comeback first came to her—when she was months into her first, hard-won pregnancy. With humor and candor, Dara recounts how she returned to serious training—while nursing her infant daughter and contending with her beloved father’s long battle with cancer.

Outside of swimming, Dara Torres has made a name for herself as a TV commentator and a print model and was the first athlete to appear in the Sports Illustrated swimsuit issue in 1994. Dara Torres was also a feature correspondent for Good Morning America, ESPN, TNT and Fox News Channel, including stints on NHL Cool Shots and Fox Sports Sunday.

Dara Torres speaks frankly about diving back in for her comeback; about being an older athlete in a younger athletes’ game; about competition, doubt, and belief; about working through pain and uncertainty; and finally—about seizing the moment and, most important, never giving up. A truly self-made legend, Dara Torres’ story will resonate with women of all ages—and with anyone daring to entertain a seemingly impossible dream.

More About Dara Torres . . .
Since her first international race at the age of 14, Dara Torres has proven that she is a far-from-average athlete. As a student at the University of Florida, she earned the maximum possible of 28 NCAA All-American swimming awards.
After the 2000 Olympics, Dara Torres “retired” again to start a family, but dove right back into swimming in the 2006 Masters Nationals, where she broke a world record – just three weeks after her daughter’s birth. In August 2007, Dara won another National title and broke her own 7 year old American Record in the 50 Freestyle.

Dara Torres successfully made her comeback to competitive swimming by making her 5th Olympic squad, and winning a total of 3 silver medals at the Beijing Olympic Games in 2008.

Dara Torres’ impressive performance in Beijing has inspired many older athletes to consider re-entering competition, including cyclist Lance Armstrong. Torres herself has shown no signs of slowing down anytime soon. She’s announced plans to compete in the 2009 world swimming competition in Rome, and has not entirely ruled out entering the 2012 London Olympics.

Six-time Olympic coach Michael Lohberg described Dara Torres’s drive as “just amazing”, “To make a run at the Olympics for a 40-year-old mother seems totally out of the question …. But Dara Torres is not measured by normal standards. She is truly an exception, defying several laws of life.”

“Dara rocked! It was such an honor and everyone is still buzzing about it.”

“As expected, everything went smoothly with Dara Torres this morning. She nailed her inspirational speech and brought the crowd to their feet with applause. It’s been a pleasure to work with someone as professional, down-to-earth and motivated as Dara.” 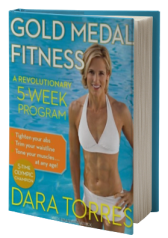