Domenica Catelli is also a recurring judge on Iron Chef America, a regular guest on CBS News, Oprah and Friends and Dr. Oz on XM radio. She has been featured in Vegetarian Times, Southern Living Magazine, andon Oprah.com.

Chef Catelli is the national spokesperson for the Organic Trade Association and is currently the brand ambassador and spokesperson for Safeway’s O Organics line. Domenica Catelli was a featured chef on Fox News in Houston for years on the Fox Grill, educating viewers with her ingenuity and humor, and her culinary talents have led her to cook for such celebrities as Oprah Winfrey, Julia Roberts, Thandie Newton, and John Travolta.

More About Chef Domenica Catelli. . .
Domenica Catelli is a member of the Chef Advisory Board – along with other celebrity chefs, including Jamie Oliver, Paula Deen, and Tyler Florence – of the non-profit organization Common Threads. Over her career, many well-known chefs have turned to Domenica Catelli’s expertise when developing recipes. Domenica’s contributions are celebrated in the James Beard award-winning cookbook, Back to the Table, by Art Smith and can also be found on products in thousands of grocery stores nationwide.

During her childhood in Sonoma County wine country, Domenica Catelli’s senses were filled with the memories of fresh, seasonal food. Chef Catelli has created unforgettable menus for several restaurants in California, from Laguna Beach to the beautiful Mendocino coast, where she served as Executive Chef of the organic restaurant Raven’s at the Stanford Inn, featuring recipes from the estate’s three-acre garden.

Chef Domenica Catelli also runs her family restaurant, Catelli’s in the heart of California’s wine country with her brother, Nicholas.

“Domenica Catelli gave a fantastic presentation to our employees as part of our Health @ Google speaker series. She was entertaining and engaging and provided key takeaways for the audience to go home with and share with their families. Furthermore, she was inspiring and gave you the confidence and information to cook healthy meals, particularly for those of us that are inexperienced in the kitchen.”

“Domenica Catelli is one of the most dynamic speakers I have ever heard. She is passionate about her belief in healthy choices. I loved the way she moved around the audience energetically engaging them every step of the way. Her enthusiasm and charm was contagious. No one wanted the evening to end!” 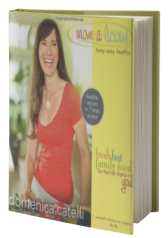