She Wins, You Win

Race, Gender & Ethnicity in the Workplace

Gail Evans’ Main Accomplishments Include . . .“Love the Game” -With those words Gail Evans concludes Play Like A Man, Win Like A Woman, one of the most successful and influential books about women in the workplace. Ironically, many women did not even know “the game” existed before Evans taught them how to win in the workplace with her book.

The book was listed on the New York Times, Business Week, and Wall Street Journal bestseller lists. Play Like a Man, Win Like a Woman has been translated into 21 languages and has been a bestseller around the world. Gail Evans’ status was enhanced even further with the publication of her second bookShe Wins, You Win.

When it comes to the success of women in the workplace, Gail Evans is a leading authority. She has appeared on The TodayShow and Larry King Live, and has been featured in PeopleMagazine, The New York Times and USA Today.

Where did Gail Evans learn the business game? In the male-dominated world of television journalism and politics. She began working at CNN at its inception in 1980. By the time she retired in 2001, Gail Evans was its Executive Vice President. During that time she was responsible for program and talent development at all of CNN’s domestic networks overseeing national and international talk shows and the Network Guest Bookings Department, which schedules about 25,000 guests each year.

In addition to speaking and teaching, Gail Evans has served on numerous charitable boards including: the Radio Television News Directors Foundation, the Society for Women’s Health Research, the Atlanta Girls School, the Ga. State University Law School and the Breman Jewish Heritage Museum. Gail Evans is the former chairperson of the Georgia Endowment for the Humanities and was also appointed by President Clinton to the Commission on White House Fellows

Early in her career, Gail Evans worked on both House and Senate staffs and at the White House in the Office of the Special Counsel to the President during the Lyndon B. Johnson Administration. During her tenure at the White House she was part of the team that created the 1966 Civil Rights Act and the Presidents Committee on Equal Employment opportunity.

Gail Evans lives in Atlanta and is the mother of three and the grandmother of seven.

“Our guests loved Gail. They found her to be very engaging and quite inspirational. I appreciated that she made herself available to us by phone prior to our event, signed books for our guests, reviewed the advance materials that we provided to her, joined us for the entire evening and happily answered questions from the audience before, after and during her presentation.”

“Thank you for your wonderful and important presentation at the Womens Leadership Summit. You ranked highest among all of the brilliant leaders presenting at the conference. All of us have retold parts of your message countless times since the summit. We could not have had a better keynote. Many people mentioned your warmth and generosity, too. The ideas you shared have provided specific actions and attitudes we all must take to ensure progress.”

“I can’t tell you how many women told me that you described them to a ‘t’ during your remarks. You shared countless pearls of wisdom. Your message was especially powerful for our corporate group.”

“What a true delight to have you participate in our Professional Womens 2nd Annual Getaway. Your words of wisdom and knowledge were so inspiring. You rock!” 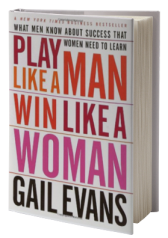