Finding the Courage to Make Up Your Mind

SIMUL: A "SIMUL" is a masterful display of chess. This intriguing contest involves between 15 & 30 opponents playing simultaneously against Garry. It is always fun and easy to organize and is highly successful when used for corporate entertainment or a business anniversary or celebration

Garry Kasparov’s Key Accomplishments Include . . .
Garry Kasparov has been the highest-rated chess player in the world for over twenty years and is widely considered the greatest chess player that ever lived. He was born in Baku, Azerbaijan, USSR.

On his seventeenth birthday, Garry Kasparov achieved Grandmaster status. His most notable achievement was the title of World Champion; the youngest ever, at the age of 22. This match was against the reigning champion Anatoly Karpov and lasted six months, ending inconclusively due to player fatigue. A re-match was ordered in November 1985 and Kasparov was victorious.

Garry Kasparov gained global notoriety for his matches against the world’s strongest computers. In ’96 and ’97 Kasparov played matches against IBM’s Deep Blue. The series was tied at one win each when IBM dismantled the program.

Garry Kasparov’s books include the My Great Predecessors series, about all the world chess champions and How Life Imitates Chess.
From Strategy and Tactics to Logical Thinking and Politics, “forceful, compelling and knowledgeable” are words used to describe a speech by Garry Kasparov.

Widely recognized as an expert on Russian affairs, Garry Kasparov is the youngest-ever contributing editor for the Wall Street Journal. In 1993, Kasparov helped form the Professional Chess Association (PCA) to create “a new era for professional chess and to make our sport a household game.”

Garry Kasparov has been active in Russian politics, as he explains, “We are not fighting to win elections – we are fighting to have elections. The goal is to bring all opposition groups into a broad coalition to return Russia to the path of democracy.”

Garry Kasparov is a regular guest speaker at conferences worldwide, including the World Economic Forum at Davos and the Cursos de Verano in Madrid. 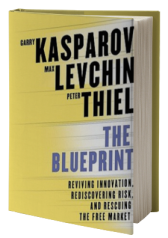