Harvey Mackay’s Key Accomplishments Include . . . Harvey Mackay is one of America’s most popular and entertaining business speakers. Toastmasters International named him one of the “top five speakers in the world.”

In 1959 at age 26, Harvey Mackay purchased a small, failing envelope company. Today, Mackay’s company is one of the nation’s largest envelope manufacturers, producing 25 million envelopes a day and has grown to a $100 million business employing over 600 people. As chairman, Harvey Mackay’s philosophy is engrained in the company, beginning with its motto: Do what you love, love what you do and deliver more than you promise.

Harvey Mackay is the author of the New York Times #1 bestsellers Swim With The Sharks Without Being Eaten Aliveand Beware the Naked Man Who Offers You His Shirt. Both books are among the top 15 inspirational business books, according to the New York Times. His other best selling works include: Sharkproof, Dig Your Well Before You’re Thirsty and Pushing The Envelope: All The Way To The Top. In total, Harvey Mackay’s books have sold 10 million copies worldwide, been translated into 37 languages and sold in 80 countries. Harvey Mackay is also a nationally syndicated columnist for United Feature.

Syndicate, whose weekly articles appear in 52 newspapers around the country.

Harvey Mackay is a graduate of the University of Minnesota and the Stanford University Graduate School of Business Executive Program. He has been a guest lecturer at various universities and business schools, including Harvard, Stanford, Michigan, Cornell, Wharton and Penn State.

Central to Harvey Mackay’s business, and to his books, is the ability to stay competitive in the often cut-throat world of business, to ‘swim with the sharks’, without sacrificing one’s personal integrity or doing it at the expense of other people. Harvey Mackay does this by focusing on building strong relationships with both customers and employees.

In fact, Harvey Mackay is a master of networking. He believes most people make the mistake of only turning to their network when they need it; for example, when they’re looking for a new job. Harvey says that networking is a lifelong practice that provides you with new knowledge and experiences, job security, expanded financial reach, and the strength of the group. The secret to maintaining a great network is, according to Harvey Mackay, knowing the value of the personal touch.

Harvey Mackay currently sits on the board of the Minnesota Orchestra and is a former director on Robert Redford’s Sundance Institute and the University of Minnesota’s Carlson School of Management. He is an avid runner and marathoner, and former #1 ranked tennis player in Minnesota.

All of which is why Fortune magazine refers to Harvey Mackay as “Mr. Make Things Happen.”

Play Harvey Mackay: No Correlation Between IQ and Intelligence

“Harvey Mackay is the only person I’ll listen to while standing in shark-infested waters. …and you’ll be able to reel in any shark you want.”— Larry King”Harvey Mackay is one of those people who can make extraordinary intelligence and profound wisdom sound bright and stunningly simple.” — Mario Cuomo”Once I started to follow Harvey Mackay’s advice, I couldn’t stop. Each lesson is clear, to the point and right on.” — Leonard Lauder President & CEO, Estee Lauder, Inc.”Harvey Mackay will be of help to you no matter how you earn your living or what may be your vocation in life. Down-to-earth know-how with day-by-day helps that anyone can master.”

“Harvey Mackay sets the standard. He does what he loves, we love what he writes, and he delivers more than he promises.”

Productivity Expert and Author of The Psychology of Winning 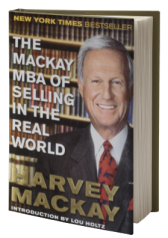