Hunter Tylo’s Key Accomplishments Include . . .
Hunter Tylo, a supermodel in the seventies and eighties, has graced the covers of over 200 magazines worldwide. In addition to her ongoing roles in the soap operas All My Children and The Bold and The Beautiful she has had roles on numerous other TV programs. Ms. Tylo was also the Pantene Girl, Cover Girl, and Lux Girl during her modeling career.

Hunter Tylo’s autobiography Making a Miracle, rose to No. 35 on the New York Times Best-Sellers List.

Twice named one of People magazine’s “50 Most Beautiful People” Hunter Tylo sits on the board of Retinoblastoma International and started her own charity, Hunter’s Chosen Child, to raise awareness of the disease.

More About Hunter Tylo . . .
Hunter Tylo is not just a celebrity. She is also an activist and fundraiser on behalf of many children’s causes. In 1998, her daughter Katya, who was then four months old, was diagnosed with retinoblastoma, a rare form of eye cancer that required the removal of her right eye. Surgery and chemotherapy seemed to do the trick, however, and although the child developed similar tumors in her other eye at one point, they disappeared and she has been cancer free for years. At the time, there was no protocol for eye screenings of infants. As a result of this experience, Hunter Tylo created and helped pass California State Bill AB218, which provides all infants in California with pupil dilation for detection of preventable forms of blindness and fatal diseases.

Hunter Tylo also won a landmark case for pregnancy discrimination. She successfully sued producer Aaron Spelling for firing her from Melrose Place after he learned she was pregnant. The trial served as the basis for forming her non-profit corporation, Hunter’s Chosen Child, an organization that provides financial, educational and emotional support to young and low income parents. 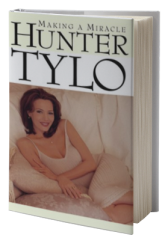