Isabel Aguilera is a leading specialist in successful strategies for developing the sustainable, competitive edge for organizations. With extensive executive experience, she advises organizations and presents at major business schools. Isabel specializes in the process of optimization, management and monitoring of companies and multinational, multifaceted and multidisciplinary teams.

A regular speaker at numerous forums, Isabel has proven expertise in creating unique business models after the acquisition or merger of major organizations. As a presenter, she shares solid professional knowledge while also listening to the audience to provoke discussion and reflection.

The Role of New Technologies in Business

Opportunities and Challenges in the 21st Century: "The Business of the Sun"

Competing in the Century of Technology

From 2002 until 2005, in her role as Chief Operating Officer for NH Hotels, Isabel Aguilera looked after every detail of the company’s 240 hotels in 18 countries.

Prior to joining NH Hotels, Isabel Aguilera served as Dell Computer Corporation’s Chief Executive Officer and Business Unit Director for Spain, Italy and Portugal. Under her sound leadership, Dell increased its market position in Europe and moved from 9th to 1st in the Spanish market. Additionally, Ms. Aguilera served in sales and marketing capacities at Olivetti PC, Airtel Movil (Vodafone), and Hewlett-Packard.

Isabel was responsible for the implementation of Google Iberia (Spain) between 2006 and 2008 and before that, creation of international business model for NH after buying Mexico hotel chains, Germany and the Netherlands (2002-2005). Prior to Google and NH, she was CEO and Commercial Director for Southern Europe at Dell Computers. Between 2008 and 2009, Isabel was the president of General Electric in Spain and Portugal.

Isabel has broad experience with international business issues and is also as director of Laureate Education Group, Inc., the International Council of IE Business School and the Council of Emergia

Isabel has been recognized by institutions and business associations (AED FEDEPE) and publications, such as the Financial Times, The Wall Street Journal and El Mundo. She is also author of, The Crossroads Charlotte: Keys to achieve professional success (also in Spanish, La encrucijada de Carlota).

More About Isabel Aguilera:
Today, her 20 years of experience in marketing and operations serve Isabel Aguilera well in her role at the Board of Directors of Indra, the leading Spanish IT company, Banco Mare Nostrum (BMN), Aegon Spain and EGASA. She is also President of the Social Council of the University of Seville, and associate professor of ESADE and Deusto Business School.

This tireless business maverick holds a degree in Architecture and an MBA by the Instituto de Empresa and a PDG (General Management Programme) by the IESE.

“One of the 50 most influential businesswomen in the world.” 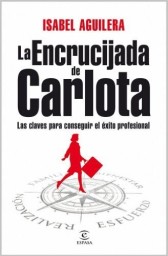